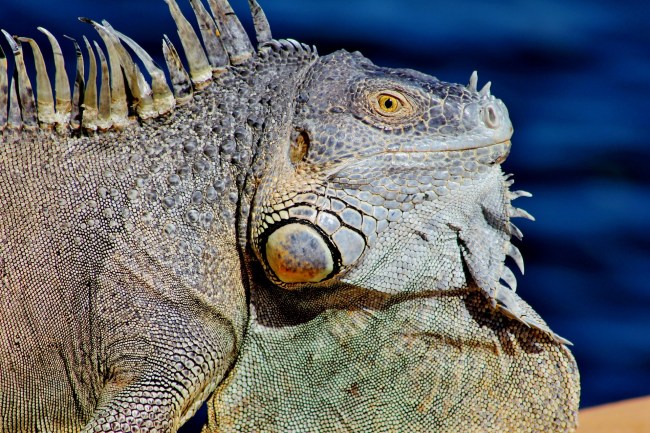 A pizza shop in West Palm Beach, Florida was forced to temporarily shut down after it was hit with 27 violations, some serious, during a routine health code check. One of those violations included the inspector finding a massive 80-pound iguana stored in a mini-freezer that the owner claims was a gift to be eaten later.

The Green Iguana is the species of iguana found throughout Florida and fully grown they can get up to 20 pounds. Now multiply a fully grown iguana times four and you begin to realize that the iguana they had on their hands might’ve been verging on the size of Godzilla. Never in my life have I heard of an iguana that large.

According to the Sun-Sentinel report, the 80-pound dead/frozen iguana wasn’t being kept with the restaurant’s food. However, there were quite a few serious violations that led to the pizza shop being shut down for a deep clean:

Pizza Mambo, located at 7402 S. Dixie Highway, was temporarily closed down for a day on June 18 after an inspection from the Florida Department of Business and Professional Regulation uncovered a litany of violations, including an iguana “about 80 pounds” being stored in a chest freezer, per the report.

The natural follow-up question, of course, is “Why was an 80-pound iguana being kept in a restaurant freezer?”
While the store owner couldn’t be reached for comment, a Pizza Mambo employee told the South Florida Sun Sentinel the iguana was given to the owner as a personal gift for later consumption. The iguana, which was stored in a separate mini-freezer away from the restaurant’s food, was immediately thrown away after the owner was informed of the violation, according to the employee.

Among the worst infractions, Pizza Mambo had over 20 “rodent droppings” under a dry storage shelf and numerous dead roaches throughout the facility, per the report. One roach was found on a paper towel dispenser next to the sink. (via)

What sort of sauce/seasoning do you use to cook and eat iguana? The University of Florida has this article on tips for cooking iguana which includes things like ‘do not make iguana ceviche’ and it has a recipe for Iguana Hominy Stew.

This is all eerily reminiscent of The Freshman with Matthew Broderick and Marlon Brando, a movie I’d forgotten about until a colleague reminded me of it this morning:

Growing up in Southwest Florida I always heard that some people in South Florida would eat iguanas. I’d never met anyone who had claimed to eat an iguana themselves. Iguanas are all over Florida but the town I grew up in, Siesta Key, happened to be one of the places where you don’t find them. Sightings are on the rise in the Tampa Bay area, however.