This One Fact Likely Guarantees That Aaron Rodgers Will Return Next Season, For Better Or For Worse 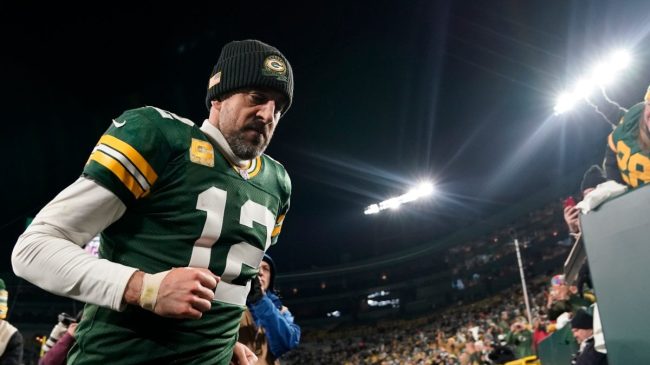 With the Green Bay Packers currently sitting at 4-8, they’re all but guaranteed to miss the playoffs this year, which would mark just the fourth time that Aaron Rodgers hasn’t played in the postseason since becoming the team’s starting quarterback (2008, 2017, and 2018 were the previous years).

Given the struggles of both the team and Rodgers himself — the two-time defending NFL MVP has thrown nine interceptions through 12 games, which is the most he’s thrown in an *entire season* since 2010 — and his recent flirtation with retirement, some NFL fans have speculated that the 38-year-old four-time MVP could call it quits after this season.

Those suggestions, however, ignore one key factor: Rodgers’ contract. As pointed out in a recent article from ProFootballTalk, Rodgers is due to make almost $60 million in fully guaranteed money next year, which would be a staggering amount of coin to walk away from.

Depending on how much worse this season gets, there’s a chance that the Packers could bench Rodgers in favor of Jordan Love to see whether or not the former first-round pick has the potential to be a franchise quarterback. When asked about that prospect, Rodgers said he’d be open to sitting on the bench if and when the team is officially eliminated from playoff contention.

Asked by reporters on Wednesday whether it would be beneficial to Rodgers to not finish the season, given his lingering thumb and rib injuries, Rodgers tied the balance of 2022 and 2023 together.

“That’s an assumption that this place won’t look any different next year. So I think, again, that’s part of the conversation,” Rodgers said.

To close out the disappointing 2022 season, Rodgers and the Packers will take on Chicago Bears, Los Angeles Rams, Miami Dolphins, Minnesota Vikings, and Detroit Lions.