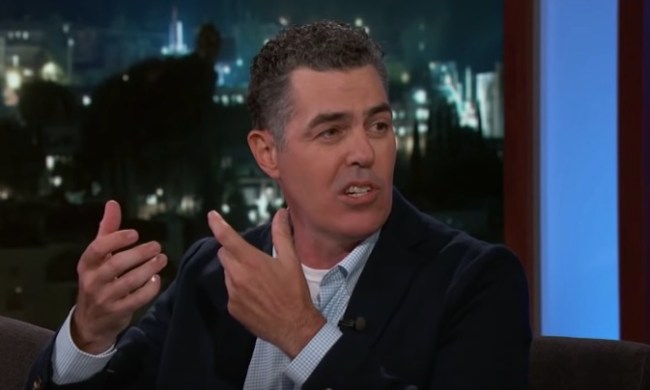 Comedian Adam Carolla has to hold the record for guest appearances on Jimmy Kimmel Live! after his 53rd appearance last night. I don’t really have the time to fact check this but I can’t imagine there’s been a guest who’s appeared even 2/3 as frequently as that.

As I’m sure you know, Adam Carolla and Jimmy Kimmel are lifelong friends after boosting their TV fame together as co-hosts of The Man Show. They’ve been close friends since the 90s, not just colleagues. They spend holidays together chilling at Jimmy’s house down by the beach for the 4th of July. As Jimmy describes it, it was a picture perfect weather day and instead of chilling on the sand the two guys sat inside and watched TV all day. When the Nathan’s 4th of July Hotdog Eating Contest came on TV, Adam Carolla unloaded his thoughts on why it’s bad for America:

On the one hand, I see Adam Carolla’s point. There are people out there dying in pursuit of clean water. That’s all they need to survive, clean water. And we’ve got a group of guys on TV dunking hotdogs in cups of water while scarfing down ungodly amounts of food in a short period of time. It’s the ultimate display of gluttony. On the other hand, fuck you, Adam Carolla. Nothing’s more American than the Nathan’s Hotdog Eating Contest.