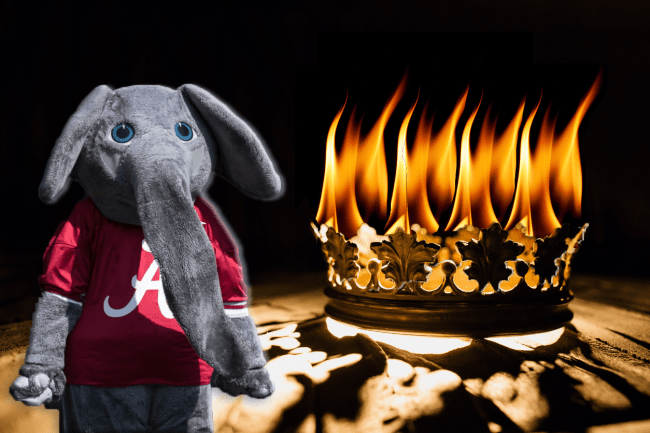 In what is being considered one of the biggest upsets in University Alabama history, senior McLean Moore was named 2021 Homecoming Queen over Crimson Tide softball pitcher Montana Fouts.

However, in the aftermath of the election, claims of fraud surrounding Moore’s campaign have surfaced.

Moore and her campaign surpassed the 12 infraction points necessary for the Student Government Association Elections Board to consider disqualification, but they never held a hearing and she was still crowned queen.

JUST IN: McLean Moore is your 2021 University of Alabama Homecoming Queen pic.twitter.com/eI0GsVsOw2

The drama is JUICY. A recent report by The Crimson White’s staff reporter Kayla Solino detailed the saga, but here is the gist:

Moore was one of five candidates campaigning for the title, and was considered to be a favorite along with Fouts.

She is a senior from Tuscaloosa majoring in finance and economics, and her campaign was sponsored by her sorority, Kappa Kappa Gamma. Her philanthropy is the Big Brothers, Big Sisters program.

As such, her campaign logo featured a block graphic that depicted two girls, one white and one of color.

The white girl, representing Moore, was wearing a crown and placed her left hand on the shoulders of the younger girl of color. The girl of color represented Moore’s “little sister” Kenyetta, who she mentors through the BBBS program.

While some students believed her logo to use Kenyetta’s image for political gain, others said that they understood the intentions, but that the logo was tone-deaf. Moore maintained that it was simply a portrayal of her relationship with Kenyetta and her philanthropy.

This year, in the largest homecoming election turnout since 2015, 13,180 students turned in a vote. Moore won, and the Elections Board released results on Monday that revealed she received 47% of the votes.

Ultimately, about 300 votes reportedly separated her and Fouts.

While Moore had the most votes, the University of Alabama Elections Manual states that a candidate must have a majority of votes to win. It defines a majority as “fifty percent of the votes cast plus one additional vote.”

As a result, per the manual, a run-off election should have been conducted “no sooner than two class days following the election, but not later than ten full class days after the election, for the two candidates that receive the largest percentage of votes cast.”

Thus, Moore and Fouts should have gone to a run-off.

Additionally, students are allotted three full days to contest the results, but that was not possible this year. The official election results for homecoming queen were not made publicly available until more than three days after the election.

In addition to the questions surrounding the run-off, or lack thereof, reports have surfaced surrounding potential wrongdoings within Moore’s campaign. It all stems back to her financials.

Moore failed to accurately report expenses or in-kind donations, which should have received six infraction points per violation. She also did not report her professional-quality campaign videos, which also should have resulted in a six-point infraction.

On those two violations alone, she and her campaign reached the 12 infraction point total. That would typically call for a hearing and potential disqualification.

Neither of those things occurred.

Furthermore, all homecoming queen candidates must file campaign financial disclosure forms once a week, each week, from the start of their campaign until election day. According to the Crimson White, some of Moore’s forms were late and inaccurate.

As of Oct. 16, Moore had only reported one form on Oct. 4 and reported $0 in expenditures, despite the fact that her campaign had included personalized signs and buttons. She also held a car painting event and later reported the expenses.

Her second form should have been available to the public on Oct. 13. It remained missing through at least Oct. 16, which would be considered a nine-point infraction.

Later in the campaign, she modified a form after the submission deadline. That is considered a six-point infraction.

To make matters even worse, Moore’s third financial disclosure form was late, which is a nine-point infraction. And, as of Oct. 25, only one of Moore’s two forms include a copy of receipts.

The Elections Manual says that candidates “must provide all receipts and estimates” for all financial disclosure forms. If they do not, it results in a six-point infraction.

For those keeping track at home, that is a total of 42 potential infraction points.

To read more on this story, The Crimson White and Kayla Solino did a great job reporting on this saga. You can find her article here.

In response to the news, people reacted accordingly:

McLean Moore did not throw a perfect game

– Running for Governor of Alabama?

– Running for Homecoming Queen at the University of Alabama?

The answer may surprise you.

A few of my questions:
-No homecoming candidate won 50% of the vote, why was there not a runoff?
-Why did SGA say they'd upload the election results by Friday but not upload them till Monday?
-Why does SGA not actually outline homecoming elections it its election manual? https://t.co/USp4XrYoLz pic.twitter.com/4Cy1gGThYp

When you can’t trust the process that elects the Alabama Crimson Tide Homecoming Queen, what can you trust? https://t.co/Cf1jEENKKt

I had absolutely no idea that the return of the Homecoming Bonfire meant “in the Alabama secondary.” pic.twitter.com/7A9rRrsBXw