Alex Caruso Snuggles With Instagram Model, May Have Hinted At His Desired Destination 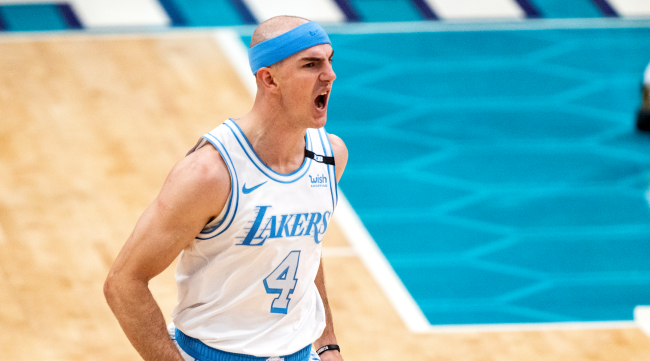 Fan favorite point guard Alex Caruso may have revealed where he wants to play next year in a photo of him snuggling up to Instagram model Mia Amabile.

The 27-year-old out of Texas A&M has played for the Los Angeles Lakers during all four years of his NBA career after becoming the first player to go directly from the G League to the NBA on a two-way contract.

Despite lofty nicknames like Bald Mamba, GOAT, and White Mamba 2.0, Caruso went undrafted and has only averaged 5.9 points and 2.4 assists per game during his NBA career.

The unrestricted free agent, however, has been drawing interest from “multiple suitors” and was made much more expendable to the Lakers after the team acquired Russell Westbrook.

The recent photo of Caruso and Amabile was taken in the model’s home state of New Jersey and was captioned, “He’s a Jersey Shore boy.”

Does the photo mean (a) Caruso and Amabile are officially a couple? And (b) the guard is looking to take his talents to the Northeast?

Lakers fans are much more concerned about the latter, making numerous pleas and offers on social media to help entice the Lakers into re-signing the Aggies’ all-time leader in assists and steals.

“They trade my favorite player @ACFresh21 Ima be pissed,” wrote one Lakers fan.

“Will cry if Lakers don’t resign @ACFresh21,” tweeted another.

And on and on it goes…

Hey @ACFresh21 I know the Lakers probably can't pay you the most but if you stay for with the Lakers I will pay for your Netflix /Hulu/ ESPN & Disney+ or just give you my logins. You won't get this deal from another fan base 😁 pic.twitter.com/SgE0PEbx1W

Man. LeBron and AD best break off some of their mils for Lakers to re-sign Caruso. It’s gonna be a riot if we don’t re-sign Alex Caruso @Lakers

@ACFresh21 hey bro i hope you having/ had an amazing day so far! I hope your Sunday and every single day of your life is even greater and amazing than the last one! Love you bro. Laker nation is here with you! Forever and always. Please stay. 🥺🙏 #LakersNation

I’ll do your laundry anytime you’re in the state of Oregon as well as pay for all drive thru meals in the state. Please. Don’t. Leave.

According to Bill Oram of The Athletic, “The Lakers should and will try to retain Caruso and [Talen] Horton-Tucker, but that will depend on how deep they are willing to go into the luxury tax. Caruso knocked down 40.1 percent of his 3s last season.

“He is expected to meet with several teams when free agency begins Monday afternoon, a league source told The Athletic, with a belief that he will have multiple options at the full midlevel exception of $9.5 million. The Lakers presumably would be willing to go into the low double-digits to retain Caruso. He is a known commodity, albeit one with a clear ceiling.”

It will be interesting to see how Lakers fans react if the team doesn’t end up re-signing the popular point guard.

Regardless of how it all ends up shaking out, it looks like Caruso will be doing just fine either way.