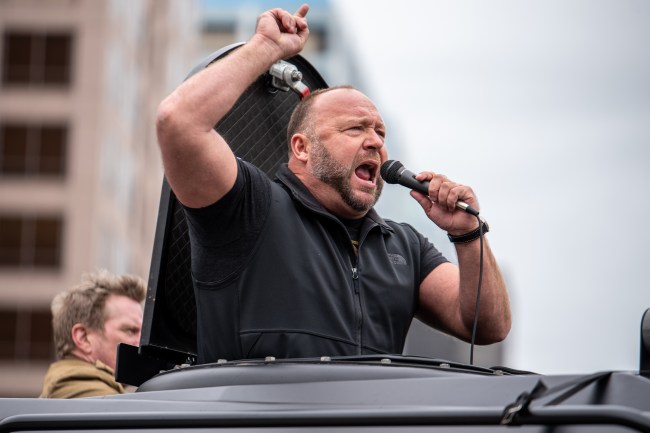 Right-wing conspiracy theorist Alex Jones might have unleashed his craziest rant yet on Friday.

With much of the country still in lockdown due to the global health crisis, Jones revealed that he has contemplated eating his neighbors during quarantine.

“I will admit it — I would eat my neighbors,” Jones said.

“I’m not letting my kids die. I’m just going to be honest. My superpower is being honest. I’ve extrapolated this out — and I won’t have to for a few years because I’ve got food and stuff — but I’m literally looking at my neighbors now and going, ‘I’m ready to hang ’em up and gut ’em and skin ’em.’”

Of course, Jones blames the globalists for turning him into a cannibal.

“You think I like sizing up my neighbor?!” he yelled. “I’m gonna haul him up by a chain and chop his ass up! I’ll do it! My children aren’t going hungry! I’ll eat your ass! And that’s what I want the globalists to know — I will eat your ass first!”

Jones’ rant would immediately get the meme treatment on Twitter.

I turned the Alex Jones rant about eating his neighbors into a jazz song. Enjoy: pic.twitter.com/Aaa0CDMgWs

Alex Jones will eat a neighbor before he eats a vegetable.

Alex Jones: “I will eat your ass.” pic.twitter.com/n2n6eNyOna