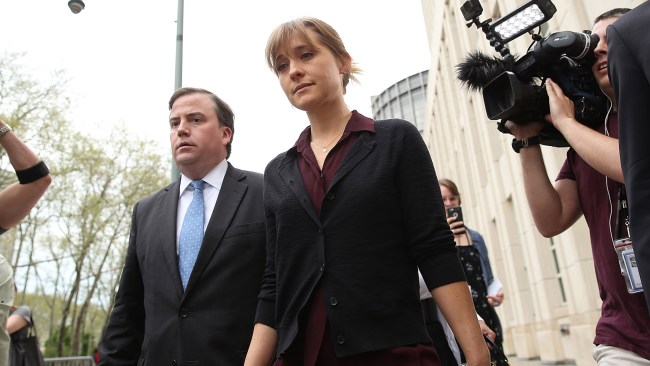 Allison Mack, who played Chloe Sullivan on the WB/CW series Smallville, is back in the news as witnesses testify against her and Nxivm sex cult leader Keith Raniere in Brooklyn Federal Court.

Now, new details of her involvement in the cult are coming to light this week as a result of the testimony currently taking place in New York.

According to a woman testifying against Raniere, Mack enticed her to join the cult by dangling a potential job playing the part of Wonder Woman, reports PageSix.com.

“I wanted to be like Wonder Woman, I wanted to play that role,” a women known only as Nicole testified Wednesday in Brooklyn federal court.

Instead, the now-31-year-old became Mack’s personal slave within that subsect known as DOS — a secret master-slave sorority that starved women, branded them, and allegedly groomed them for sex with Nxivm leader Keith Raniere.

“Trust me, you will be OK,” Mack told her of joining the group. Instead, prosecutors said Nicole would later be strapped to a table, while a fellow DOS slave named Camila forcibly performed oral sex on her.

The petite brunette testified that she never would have joined the group if she knew it was led by Raniere, but that Mack told her it was a women’s-only group.

“So look at the failures, lean into them and find the lesson deep within the pain.” new blog post!#AllisonMack https://t.co/iuys8bjLOx pic.twitter.com/329OOApUhg

“Nicole” also testified that Mack used her friendship with the daughter of actress Catherine Oxenberg against her to keep her obedient, reports NYPost.com.

”When India and I became close, they would use her to make me behave,” Nicole explained during the sex-trafficking trial of accused Nxivm leader Keith Raniere.

“Alison was trying to have [Oxenberg] get down to a certain weight, and they decided that goal weight was 107 pounds,” Nicole said.

Previous witnesses have described how Raniere preferred his “slaves” skinny, sleep-deprived and compliant.

She also testified about how she and other women were literally branded with Raniere’s initials.

Nicole testified she met with her fellow slaves at least once a week at Mack’s Halfmoon, New York home for what the actress called “church service.” Mack had nicknames for all her slaves, Nicole told jurors, saying the onetime TV star called her “the Brat,” and Oxenberg “the Princess.”

The DOS slave’s mother and father wept from the gallery as she described the excruciating pain of having Raniere’s initials seared into her flesh with a cauterizing pen.

“I was resigned to the fact that I was getting branded,” Nicole said, and then broke down again as she explained that she focused on thoughts of her family as she endured the ordeal.

Mack also allegedly tried to entice stars were Emma Watson and Kelly Clarkson into the cult. They did not accept.

.@EmWatson I'm a fellow actress like yourself & involved in an amazing women's movement I think you'd dig. I'd love to chat if you're open.

@kelly_clarkson I heard through the grapevine that you're a fan of Smallville. I'm a fan of yours as well! I'd love to chat sometime.

Mack faces up to 40 years in prison, 20 years for each count to which she pleaded guilty. She is currently scheduled for sentencing in September 2019.