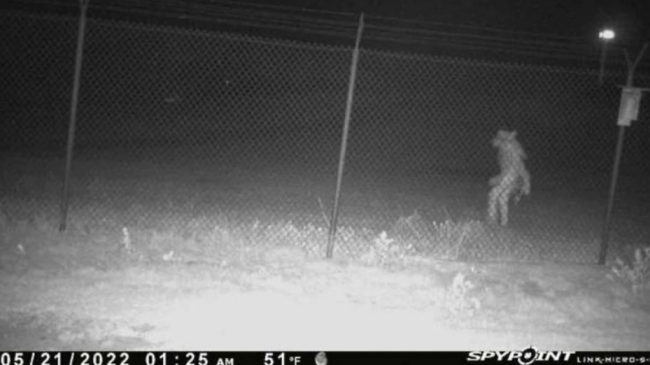 The Texas city of Amarillo is asking the public for assistance in identifying a strange thing spotted lurking outside the Amarillo Zoo. The internet is bewildered by the unusual figure, but there are Twitter reactions with guesses at what the creepy creature could possibly be.

A surveillance camera caught something creeping around the Amarillo Zoo around 1:30 a.m. on May 21, according to KFDA-TV. Apparently, zoo employees spotted the eery figure while reviewing the security cameras.

Michael Kashuba – director of Parks and Recreation with the City of Amarillo – asked for the public’s assistance in identifying the haunting object.

“We’d love to hear feedback from the community on what they think it might be,” Kashuba said. “It’s a very unique picture, and we’re excited to see what the community thinks. The photo is absolutely real.”

ALERT: In the dark and early morning hours of May 21, security cameras inside a perimeter fence at the Amarillo Zoo captured a strange image outside the zoo. City of Amarillo in seeking public assistance to solve a mystery of this Unidentified Amarillo Object pic.twitter.com/gh8Hjv4zcR

Soon after, Twitter reactions from internet sleuths began rolling in, providing their guesses as to what the strange thing outside the Amarillo Zoo could be.

Someone declared, “It’s definitely a werewolf.”

A Twitter user made a South Park reference, “ManBearPig.”

An internet user suggested, “Looks like Cheetara from ThunderCats.”

One man joked, “That there is my first wife.”

Another man quipped, “It’s my mother-in-law.”

Another hypothesized, “It’s just a furry trying to take their game to the next level!”

A Twitter user proclaimed, “Maybe Rocket Raccoon from the Guardians of the Galaxy.”

Meanwhile, other commenters suggested that it was either a hoax or a publicity stunt by the Amarillo Zoo.

One person declared, “It’s obviously an idiot wearing a costume.”