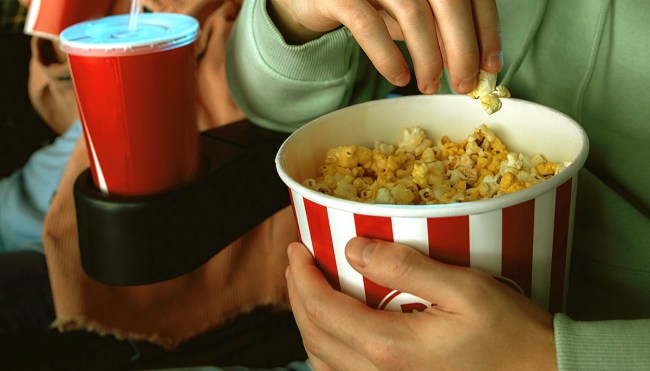 I’m just a few months away from celebrating the second anniversary of the last time I made the trek to see a movie in an actual theater—a streak I’m hesitant to bring to an end at the risk of no longer being able to tell people “The last movie I saw in an actual theater was Cats.”

While I’ve mostly reached a point where I’ve stopped living my life in constant fear of the outside world, I haven’t really felt a huge urge to end that hiatus thanks to the combination of straight-to-streaming releases and a dearth of films that have intrigued me enough to motivate me to get off of my couch and pay for a ticket. With that said, I’d be lying if I said I didn’t miss my favorite part of the theater experience: shelling out way too much money for movie theater popcorn.

There’s really no way to replicate the magical treat that is movie theater popcorn at home, and anyone who’s wanted to fill that bucket-shaped hole in their heart without heading to the cinema has traditionally been out of luck. However, according to CNBC, that’s about to change thanks to AMC.

AMC has managed to weather the pandemic thanks in no small part to the help of the amateur day traders who’ve been engaged in a love affair with the chain’s stock for the bulk of 2021, and last week, the company announced it’s planning to branch out when 2022 rolls around by launching a number of standalone stores and kiosks it’s dubbed “AMC Theatres Perfectly Popcorn.”

The locations will serve up freshly-popped popcorn alongside other movie concession staples, and while the initiative seems fairly innovative, I’m not sure if the same can be said about the plan to open them up inside shopping malls, which make the current state of the movie theater business look like a lucrative and thriving endeavor by comparison.

With that said, AMC says it’s exploring the possibility of delivering its popcorn and other items to customers and is also planning on turning its attention to movie theater popcorn’s Final Frontier—microwavable bags promising to capture the same magic—at some point in the near future.