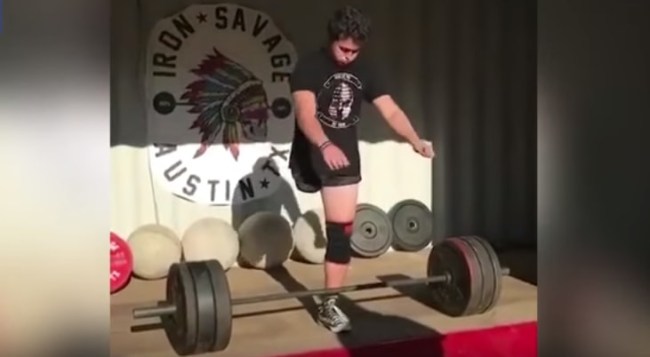 We’ve seen some pretty extraordinary weightlifting feats over the years, but this is pretty special. An Army veteran who lost his leg in combat didn’t let the fact that he is an amputee from stopping him from deadlifting 275-pounds. What’s your excuse for not hitting the gym today?

Jay Fein served in the United States Army and was seriously wounded in Iraq 10 years ago. His injuries were so critical that he had to have his right leg amputated. Despite having only one leg doesn’t stop Jay from weightlifting, even deadlifting, where so much power and balance is derived from the legs.

Fein participated in a weightlifting competition in Austin, Texas where he was bold enough to take on the deadlift despite obvious obstacles that would scare away many. After taking a few deep breaths, Jay bends down and lifts the 275-pound barbell clean off the floor. With one leg, Jay lifts the weight off the ground and keeps his balance despite the 275-pounds pulling at him. Wow, just wow.

“One day about a year ago I started dead-lifting with one leg because I’ve never dead-lifted before and I have a natural ability to be strong there,” Fein said. “This deadlift was 275 lbs and it took me almost six months to get to that point but I’m working to get more hopefully 300 lbs or more one day and I am almost there.” Keep at Jay and 300 pounds is right around the corner with your incredible motivation.