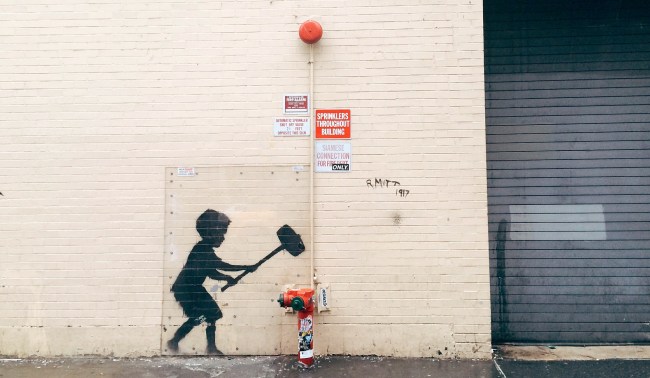 I cannot think of another TV program like Antiques Roadshow where I can honestly say that I’ve never watched a single full episode in my life but I somehow obsess over the clips. I’m not sure I could ever tell you what channel Antiques Roadshow is on TV these days but anytime I see those clips hitting the Internet I know that it’s going to be gold.

In this clip, the guy is trying to sell a genuine piece of Banksy art which he says is from 2004. He tells the host how he’d taken the piece depicting Banksy’s iconic rat who is holding a drill from a wall at the Saltdean Lido in Brighton back in 2004. He says he lived in the area and went over to see the piece and it ‘looked loose’ so he ‘pulled it off basically’ and essentially stole the piece of part from the public.

This is where the Antiques Roadshow host hits him with some instant karma. Both guys in this clip are well aware of how hands-on Banksy is with his art, certifying the authenticity of his art, and what needs to be done in order for a Banksy piece to be valuable.

With a certificate of authenticity, that piece could’ve easily been worth tens of thousands of dollars. A Banksy painting sold last year for a record $12.2 million and a statue sold for over a million.

Nobody on Twitter had any sympathy for the guy:

@bbcsoutheast This man on #antiquesroadshow admits he stole a Banksy off a wall in Brighton how do we get it back?! It's worth 20k pic.twitter.com/PmnIQqcEtv

#antiquesroadshow that Poor guy with a Banksy and no provenance letter, his Poor disappointed face, worthless without a letter, 20.000 with, ouch!

The cheek of nicking a Banksy and then going on the #antiquesroadshow to get it valued.

The potential seller was really hoping the host would tell him this was worth a fortune but without that certification of authenticity it’s not worthless but you’re essentially looking for a buyer who doesn’t care that they won’t be able to re-sell it one day and only want it for themselves.

Maybe he should just donate it back to the city of Brighton? Would that really be the craziest thing to do?