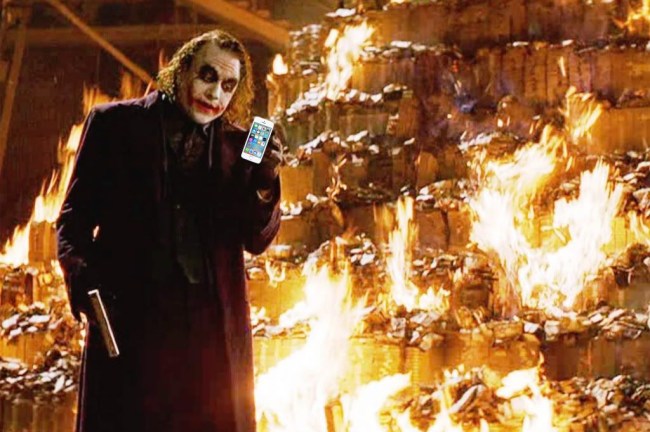 You know how they say that Home Alone would end in five minutes if it came out today?

Kevin’s mother, texting back immediately: “Oh my god! I’m so sorry, sweetie! We’ll be right home and call the neighbors to come watch you in the meantime! Hold tight!”

That’s just how much technology has changed filmmaking during the course of my lifetime: it must be accounted for in the film’s plot or else the movie risks being nonsensical. Which means… we get a lot of movie characters using cell phones these days, whether it be to call, text, Google, GPS locate, or otherwise.

Take The Dark Knight, for example, where a large portion of Joker’s escape plan relies on the use of cell phones.

But, have you ever noticed that — while both good guys and bad guys alive may be up to date with the latest cellular technology —  only the good guys are allowed to use iPhones?

Speaking to Vanity Fair for an interview, The Last Jedi and Knives Out director Rian Johnson made the stunning revelation about Apple’s peculiar rule when it comes to movie characters using their products.

“Also another funny thing, I don’t know if I should say this or not… Not cause it’s like lascivious or something, but because it’s going to screw me on the next mystery movie that I write, but forget it, I’ll say it. It’s very interesting,” Johnson began.

“Apple… they let you use iPhones in movies but — and this is very pivotal if you’re ever watching a mystery movie – bad guys cannot have iPhones on camera,” he said.

“So, oh no, every single filmmaker that has a bad guy in their movie that’s supposed to be a secret wants to murder me right now.” [via Vanity Fair]

That’s why Apple is the most popular phone in the world: branding. It may not be the best phone, but people just think it is. Perception is reality.