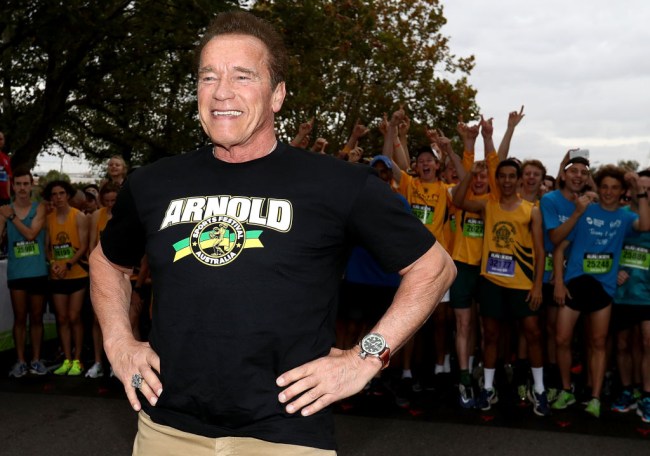 Arnold Schwarzenegger has been jacked since he started bodybuilding in the 1960s and still now at 72-years-old, he is still in unbelievable shape. So if you want exercise and diet advice, Arnold would be a fantastic expert to ask. You’re in luck, Schwarzenegger has revealed his workout routine, diet, and his protein shake recipe.

Schwarzenegger showed off his gym and fridge to Men’s Health, giving you a peek into the life of a bodybuilding legend.

Schwarzenegger revealed what his go-to protein shake is made of. Arnold blends up almond milk, tart cherry juice, one banana, and one whole egg (including the shell). Arnold said that he sometimes adds schnapps or tequila, you know for “extra flavor.” Arnold says that he “hates cow milk” and almond milk “is much better.”

Arnold said he used to eat anything he wanted when he was young, but now he has a more sensible diet. The Terminator actor says he is more health-conscious than he used to be and usually eats good proteins, oatmeal, greens, fruits, and vegetables. He stays away from meat and animal products.

He adds that when he was younger, there was a misconception that you needed to eat meat to build muscle. Arnold said he feels more healthy after decreasing his consumption of red meat. But Arnold admits that his favorite thing to cook is steak.

During the day he snacks on protein shakes and energy drinks. He has cut out white bread from his diet. Arnold admits that he takes supplements, but he doesn’t rely on them and would rather get the nutrients from good food.

Schwarzenegger said he hasn’t tried any fad diets such as keto or intermittent fasting.

Arnold believes in cheat days and is especially fond of pies. But he warns that “for every calorie you take in, you have to burn off.”

As far as his workout regimen, Schwarzenegger hits the gym every day from 7:00 AM to 7:45 AM. Then he tries to bicycle daily for at least 45 minutes. Many times during the week, the 7-time Mr. Olypia and 5-time Mr. Universe will hit his home gym at night.

Schwarzenegger reveals that he doesn’t have intense workouts anymore because doctors advised against it after the actor had heart surgery. Now the 13-time world championship-winning bodybuilder says he does lighter weights and more reps.

Arnold recommends that you work out your entire body at least three times a week.

When asked who he would want to work out with, anyone dead or alive, Schwarzenegger replied Eugen Sandow, who was a German bodybuilder, strongman and circus performer who is believed to have organized the world’s first major bodybuilding competition.

You can read Arnold Schwarzenegger’s six best tips for building muscle over at Men’s Health.