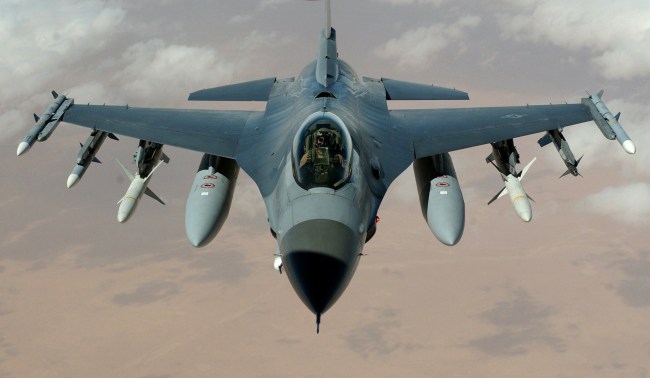 One of the Air Force’s top F-16 fighter pilots got straight-up embarrassed in a DARPA dogfight simulation against an artificial intelligence pilot as further proof that we’re pushing technology too far. There’s no reason we should be pushing artificial intelligence past the point of human limits. We want these robots to work for us, not to wake up one day and realize they could easily overthrow us in an instant.

The AI Pilot was developed by Heron Systems and it bested one of the USAF‘s top F-16 fighter pilots 5 out of 5 times. The human didn’t stand a damn chance. This was the culmination of three-day trials to showcase the maneuverability and skill of the artificial intelligence ‘pilot’ and the combat scenarios were classic one-on-one combat in a World War II-style dogfight. Here’s a rundown of the action from Breaking Defense and there’s footage of the finals below.

AI still has a long way to go before the Air Force pilots would be ready to hand over the stick to an artificial intelligence during combat, DARPA officials said during today’s live broadcast of the AlphaDogfight trials. But the three-day trials show that AI systems can credibly maneuver an aircraft in a simple, one-on-one combat scenario and shoot its forward guns in a classic, WWII-style dogfight. On the other hand, they said, it was an impressive showing by an AI agent after only a year of development. (As I reported earlier this week, the program began back in September last year with eight teams developing their respective AIs.)

Heron, a small, female- and minority-owned company with offices in Maryland and Virginia, builds artificial intelligence agents, and is also a player in DARPA’s Gamebreaker effort to explore tactics for disrupting enemy strategies using real-world games as platforms. The company beat eight other teams, including one led by defense giant Lockheed Martin — which came in second in the AlphaDogfight “semi-finals” that pitted the AI pilots against each other this morning.

Heron Systems’ AI was extremely aggressive in the games, with its AI pilot consistently able to turn and score killing hits on the simulated F-16 piloted by an unnamed Air Force pilot, with the call sign “Banger,” a graduate of the Air Force’s highly selective Weapons School at Nellis AFB. The AI exhibited “superhuman aiming ability” during the simulation, Mock said. (via Breaking Defense)

Here’s footage from the finals:

The AI Pilot won 5-0. The best we’ve got and they couldn’t beat the robot ONCE. What are we even doing anymore???? What if this artificial intelligence tech falls into the wrong hands (robots / terrorists)? What then? Do we have bigger, badder, and better robots ready to deploy? What happens what that AI fighter plane starts communicating with this damn robot dog:

They aren’t saying this AI is ready to deploy in a combat situation just yet but DARPA’s Justin “Glock” Mock went as far as saying they’ve “got AI that works” in this particular combat situation.

In order to actually deploy this artificial intelligence technology on a widespread and meaningful scale they have countless other combat scenarios to test which will likely be the next steps.

To read the full report of this, you can click here to visit Breaking Defense.