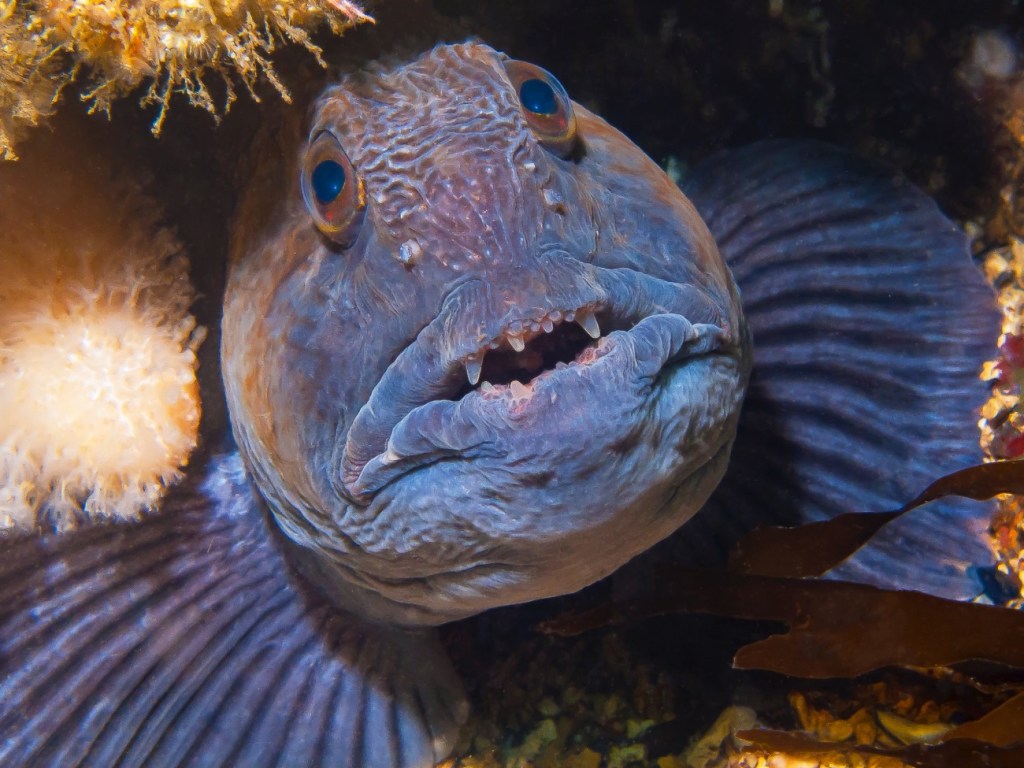 Lobster fishermen come in close contact with tons of species that aren’t lobster. All sorts of fish and crabs and tiny creatures can work their way into the lobster pots that get pulled up by the fishermen who then release them back into the water as bycatch. Some of these creatures are rarer and creepier than others. Case in point, the Atlantic Wolffish aka the Sea Wolf, Wolf Eel, Sea Monster, or Devil Fish.

I’ve never seen an Atlantic Wolffish anywhere outside of an aquarium and I’ve spent a considerable amount of time on and in the water fishing and diving. They are classified as a ‘species of concern’ by the U.S. National Oceanic and Atmospheric Administration’s (NOAA) National Marine Fisheries Service and their numbers are being depleted in US waters due to previous overfishing and bycatch from fishing for other species.

Lobster fisherman Jacob Knowles shares videos of his lobster adventures on Instagram and recently posted a clip of a gnarly Wolffish aka Wolf Eel trying to bite his hand off. But all’s well that ends well. He eventually fed the Atlantic Wolffish a (dead) lobster as a snack and sent it back into the water with a full belly for its trouble. Check it out…

One commenter wrote “Damn right they bite! Had one bite the heel of my boot off when I was dragging. Happy it didn’t get my foot.” Those teeth are no joke.

And here is another clip from May where he caught a rare Atlantic Wolffish. These things are GNARLY looking.

“One of the coolest, gnarliest, meanest looking fish in the ocean…”

The comments on these videos are wild. It’s hilarious he had to very clearly identify the lobster he fed the wolffish in the first video above as already dead otherwise people would’ve reported his video as cruelty. What do people think these fish are eating out there?

Their diet includes ‘hardshell molluscs, crustaceans, and echinoderms’ and they do NOT eat other fish. So they’re out there munching on lobster and crabs, primarily, and he just hooked up this incredible fish with an easy meal after it accidentally got itself trapped inside a lobster cage for a brief while.

Anyway, if you’re into fishing and/or lobster than Jacob’s Instagram feed is pretty solid so go give him a follow!