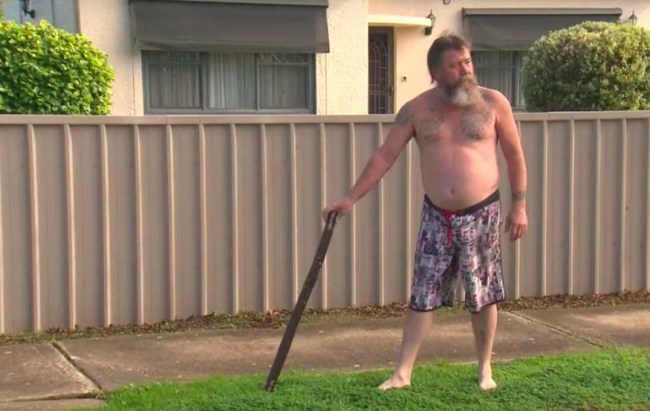 I’ve never been to Australia, and while I’ve heard great things about the country, I normally try to avoid traveling to places populated with things that can kill you waiting around every single turn.

Want to go wading into the ocean? There could be a stonefish chilling on the seabed just hoping you’ll step on it or a blue-ringed octopus biding its time. Feel like going for hike? You might want to watch out for the brown snakes watching out for you. And sure, koalas might not be able to kill you but they can give you chlamydia.

However, one Australian man recently had to deal with a more mundane threat in the form of a home intruder who entered his house in the early hours of the morning, who he summarily chased down in the most Australian way possible.

Here’s how things went down according to News Hub:

Kym Ambrook was asleep in his Adelaide home on Monday, when the sound of floorboards creaking woke him up at 4am.

When he went to investigate the noise, he found a home intruder. Despite being underdressed, Ambrook chased the man out of his home and yelled for his neighbors to help…

Once the [neighbors] had trapped the invader, Ambrook sprinted back home to grab a defense.

He returned, armed with a didgeridoo, and a torch.

On the surface, this is a fairly run-of-the-mill story so you might be wondering why I even bothered sharing it with you. The answer? The interview he gave to a local news station in which he reenacted the scene while shirtless.

"I notice I run faster naked" – A Fulham Gardens man has told how he chased down a home invader in his underwear, armed with a didgeridoo. MORE in #9NewsAt6 pic.twitter.com/Y7HIRzdFsh

As if his ability to do a split wasn’t enough, he also showed off his sick didgeridoo handling skills.

A Fulham Gardens father has chased down a home invader in his undies armed with a didgeridoo. @7NewsAdelaide pic.twitter.com/mvy2TEUD7e