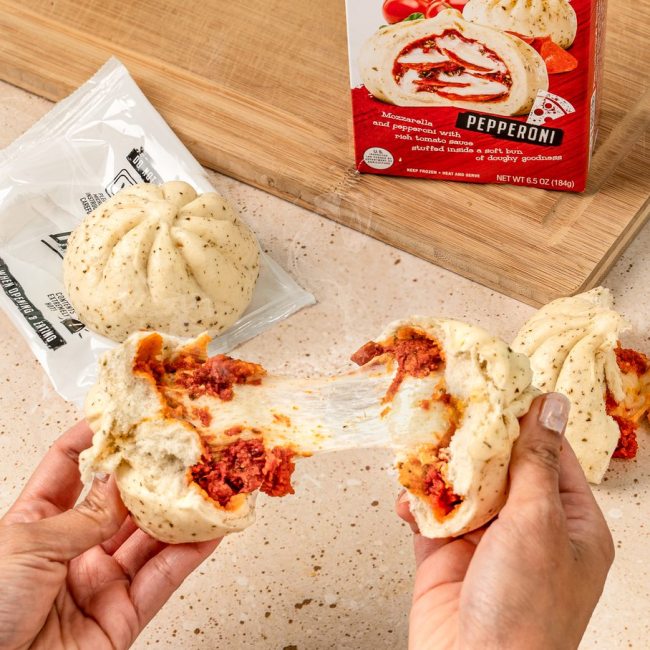 Name a style of pastry and there’s a good chance it’s been pizzafied. Just to name a few: The pizza bagel, the pizza muffin, the pizza cupcake, the pizza roll, and the pizza biscuit. If it’s doughy, there’s probably a way to blend tomato sauce and mozzarella cheese into the mix and bake up a savory trinity of cowabunga deliciousness.

In 2015, Alex Cree, a former American ex-pat in China, concocted another clever pizza innovation in his kitchen at his home in Los Angeles: The Baozza, a mashup of Bao (Chinese steamed buns) and pizza.

The result was an extremely craveble pizza snack. Baozzas are steamed in the classic Chinese baozi style, but filled with everything you’d find on a pizza. It’s basically pizza fusion. After warming up, they’re gooey on the inside, complete with soft, Italian-herb-seasoned dough, quality sauce, and tasty mozzarella cheese.

Think of a pizza Hot Pocket, but even easier to eat with one hand. Except, unlike Hot Pockets, Baozzas are steamed instead of fried or baked, meaning they don’t get crispy or flaky or burnt (unless you really want them to… more on that below).

Just a perfectly fluffy pizza pastry that melts in your mouth.

The story behind Baozza pizza buns

A business idea was born.

Alex and his business partner, fellow ex-pat Loren Heinold, knew they had to do some R&D first before taking Baozza to market. Consistency, after all, is key for crafting a pizza product that’s actually appetizing to consumer palates.

In China, they learned how to make bao from local bao masters in China. A traditional Asian bao is hand-wrapped, usually with pleats on the top. It’s traditionally enjoyed as breakfast or a quick bite to go.

“Our R&D process really took off once we hired local bao makers off the streets of Beijing,” Alex explains. “These guys train and work for seven years hand-wrapping baos before they’re considered a master, or ‘shifu.’ All of our early learnings and factory R&D we had to do in Mandarin Chinese. We’re still friends with all our original Baozza masters.”

Alex and Loren fine-tuned the recipe using traditional Chinese proofing and steaming techniques. Then they started slinging Baozza in kiosks at malls in Beijing and Shanghai as a side hustle.

In 2017, as their Baozza food stalls started spiking in popularity, they reached out to Mark Cuban to inquire about funding.

“We skipped Shark Tank,” Alex explains. “Instead, we found Mark’s email address and hit him up back in 2017. Turns out he reads his own email. He made Baozza his first ever China-focused investment back when we had one small store in the Beijing hutong alleys.” 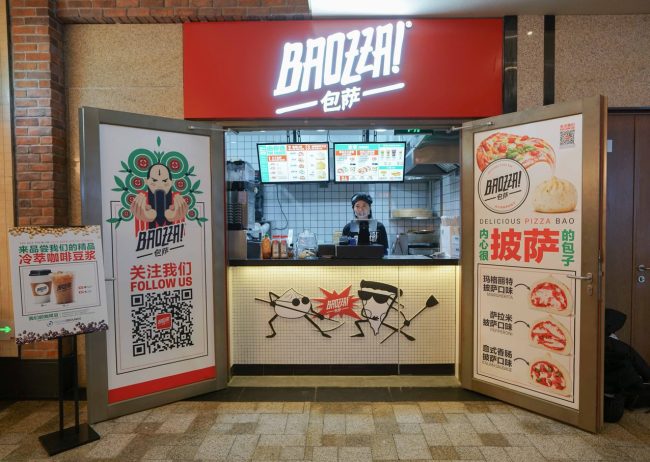 Baozza pivots to the United States

When Covid hit China in late 2019 and closed their restaurant and ghost kitchen delivery business down, an entrepreneurial lightbulb went off: Find a food manufacturer in the United States and sell a frozen line, finding a home in the freezer aisle. After all, Americans eat an estimated 3 billion total pizzas a year, or 46 slices of ‘za per person. It was a wide-open lane to capitalize on our collective appetite for all-things pizza and comfort food.

Loren and Alex closed the stores. Though they remained a multi-national business, they pivoted to the States as a point of emphasis.

In mass production, they emphasized quality ingredients, like 100% real mozzarella cheese, and slow-cooked sauces. They also brag, as a point of pride, that they have none of the nasty additives commonly found in many other frozen foods.

They blitzed grocery stores, starting out with West Coast chains like Sprouts. They went to bigger national chains from there. Word of mouth grew quickly in the United States. Platforms like Tiktok helped spread the word.

In under two years after its US launch, Baozza is now sold in over 4,300 stores in all 50 states. The brand just launched in Walmarts nationwide, in addition to Kroger, Target, Sprouts, Whole Foods, Harris Teeter, and Meijer.

People can’t get enough of them, either.

So how do you make a Baozza?

Unlike many of the other pizza snacks in the freezer section, Baozza comes packaged in unique microwave steamer bags. This food science technology means Baozzas go from frozen to steamy hot in 60 seconds. There’s no need to open the bag before you put it in your microwave. In just a minute, a Baozza is pretty much ready to eat, with no frozen inside or need for a crisping sleeve.

I’ve personally noshed on Baozzas about a dozen times over the last year and they never come out of the bag soggy. It’s pretty remarkable. The process is so simple.

I also like that a single bao is only 200 – 240 calories. That’s right in the snack zone where you get a quick fix of pizza flavor without feeling like you’re going to regret a munchie splurge.

Baozzas are in the following flavors: 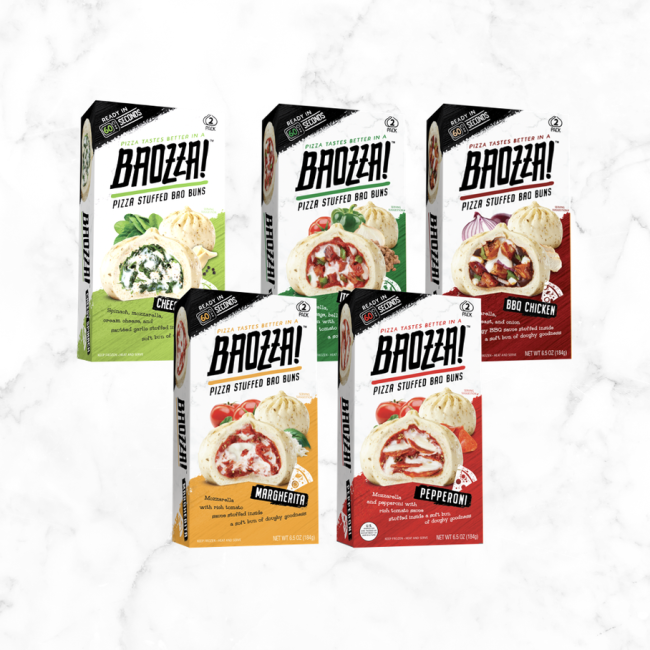 Can you use an air fryer for Baozza?

In fact, Alex and Loren changed the instructions on the box because so many people wanted to air fry them. “When we saw someone air-fry a Baozza on TikTok, and hundreds of comments asking for air fryer instructions, we realized we needed to figure this out,” Alex adds. “Sad confession…none of our team owned air fryers at the time, but we’ve sorted that.”

Full disclosure: I’m one of the people that commented that they like to air-fry these on TikTok. And it sort of blew up:

♬ Love You So – The King Khan & BBQ Show

But you have to respect the process first! First and foremost, follow the instructions on the box.

Once you heat your Baozza up in a microwave, they come out very soft and steamy – much like a traditional bao. The inside is lava hot – much like pizza rolls – so I like to give it a couple of minutes to rest and cool down before I pull it out of the bag with tongs.

This is key. Use tongs.

Once I pop it out of the bag, I’ve come to love throwing them in an air fryer for about 3 or 4 minutes at 400 degrees. It crisps the dough, creating a bit of a crunch when you bite in. Let it cool down for a couple of minutes before you enjoy.

Baozzas are really, really good when you throw them in the air fryer for a quick zap. 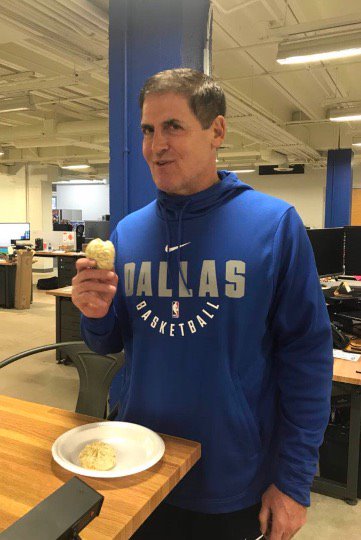 This isn’t a paid plug or anything like that. I just sampled them when a fellow foodie friend recommended them to me and really enjoyed them. I dig their grassroots approach too and the fact they aren’t focused on selling direct to consumers, focusing on proper grocery store distribution instead (you know, where people actually buy food).

I also dig that they don’t claim to be the first to “invent” the pizza bao – they say on their website that it’s been a staple in Japanese convenience stores for decades.

They’re just the first to turn it into a brand. Between China and the US, they’ve sold millions and, given the attraction of pizza, likely introduced many in the States to the wonderful culinary world of the Chinese bao. 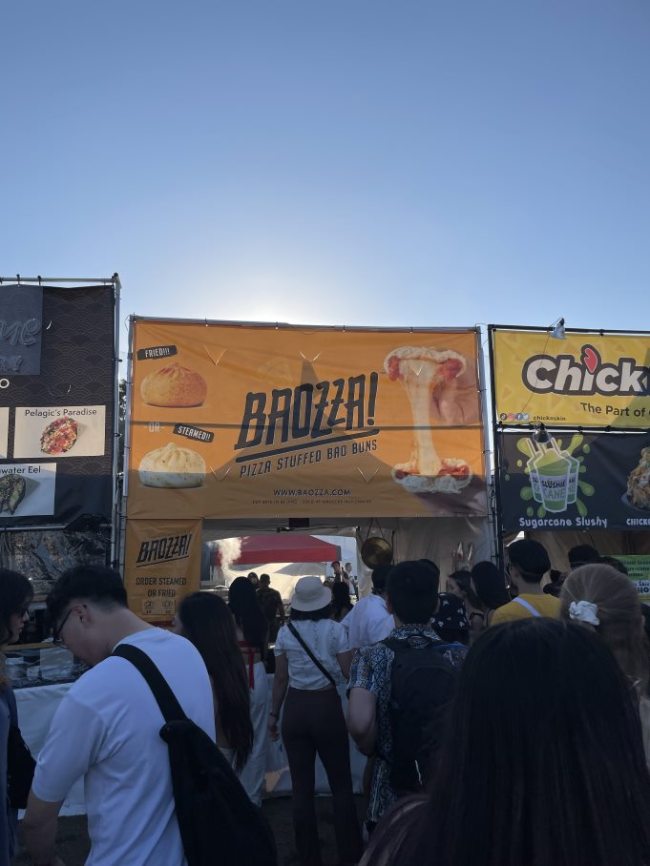 Over the summer, I got a chance to see their stall in action at the 626 Night Markets here in Los Angeles – their only IRL operation. The Baozza business was booming. Plus I think it’s super cool how Alex and Loren skipped Shark Tank entrepreneurial merry-go-round, opting to cold-pitched Mark Cuban via email.

The fact they actually got a response and funded?

That’s the kind of grit the American Dream is built on, one pizza snack at a time.