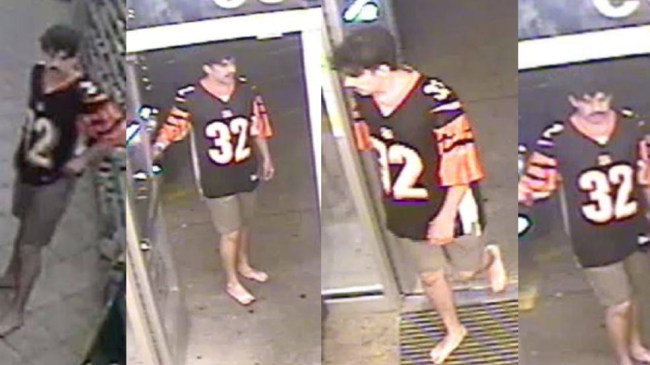 Before clicking this article, you must have assumed this went down in Ohio, right? I mean, where else on Earth would you possibly find an actual living, breathing human being wearing an outdated Cincinnati Bengals jersey. Nope, not Ohio.

What about Florida? It’s gotta be Florida, right? It’s got all of the elements — beer, unnecessarily exposed skin, theft — of a Florida story. Wrong again.

The glorious image you see above you was actually captured in Kentucky, who has quietly flown under the radar in recent years thanks to the discovery of the Florida Man species just a couple states southward.

According to a post on Facebook, the Florence Police Department has been dispersing the above image in an effort to get the public’s help in identifying the criminal mastermind they’ve dubbed the “Barefoot Beer Bandit”.

“The Florence Police Investigative Unit needs the community’s help in identifying a male we have dubbed the “Bare foot beer bandit’. The male is alleged to have entered a local Florence business where he grabbed a case of beer and fled from the store.” [Facebook]

The renegade beer thief — whose name is likely Chad, Jason, Brad, or Steve — is accused of stealing a case of beer from a gas station before taking off into the night. Frankly, I’m of the opinion that if you allow a barefooted man to steal your beer and walk right out the front door, you kind of deserved it.

While police have asked anyone who knows the identity Barefoot Beer Bandit to contact them, I’d advise against crossing this man as he’s clearly a psychopath… he’s not only a Bengals fan, but he’s still wearing a Jeremy Hill jersey in public, for christ sikes.

In all seriousness though, if being a snitch is your thing (which would be a very bold strategy, Cotton) or you’ve had a personal encounter with Barefoot Beer Bandit Brad and want to fuck him over, police want you to contact Detective Corporal Adam DeSalvo at 859-334-5551.