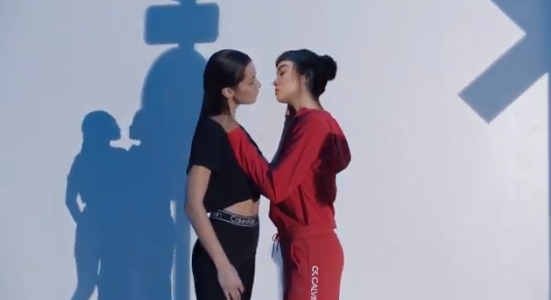 These are perilous times for advertising companies. What might seem like an innocuous marketing campaign to you, can and will “outrage” someone somewhere and those offended parties have social media to voice their fauxrage. The latest company to feel the wrath of the outrage mob is Calvin Klein for their ad featuring Bella Hadid kissing a robot.

There were people who were upset over the robosexual intimacy. After seeing the headline, one might assume that people were mad and might have an arguement of something like: “You can’t force a robot to kiss a human because can the robot give consent?” The actual reason for the backlash might even be dumber than this.

No one else can define our own truths. #MYTRUTH #MYCALVINS

RELATED: AI Sounds Just Like Joe Rogan And It Is Terrifying – The Podcast Host Responds To His Robot Impersonator

There was fauxrage over the 30-second video because… get ready for this… Hadid identifies as heterosexual and she is kissing a female robot. There are people upset because they say that the ad should have used an LGBT model because the robot identifies as female, thus it is a homosexual relationship.

Technically, the only person who truly should kiss a robot is a robosexual. Since Bella Hadid is willing to be intimate with a robot, that makes her a robosexual. So there’s that.

Never-the-less, Calvin Klein was forced to bend the knee and apologize. The clothing company issued an apology on Friday.

“The concept for our latest #MYCALVINS campaign is to promote freedom of expression for a wide range of identities, including a spectrum of gender and sexual identities,” Calvin Klein said in a statement. “This specific campaign was created to challenge conventional norms and stereotypes in advertising. In this particular video, we explored the blurred lines between reality and imagination.”

“We understand and acknowledge how featuring someone who identifies as heterosexual in a same-sex kiss could be perceived as queer-baiting,” the statement continued. “As a company with a longstanding tradition of advocating for LGTBQ+ rights, it was certainly not our intention to misrepresent the LGTBQ+ community. We sincerely regret any offense we caused.”

Here at CALVIN KLEIN, we welcome all types of constructive feedback from our community. We see your comments and we appreciate them. We'd like to offer our thoughts in response to comments on our campaign video featuring Bella Hadid and Lil Miquela. pic.twitter.com/OIcIekyR9K

Calvin Klein must be thinking, “We just wanted to sell some $50 t-shirts by having a beautiful woman kiss a robot, where did we go wrong?”

It's just like heaven being here with you You're like an angel, too good to be true But after all, I love you, I do Angel baby, my angel baby

Lil Miquela started out as a digital project on Instgram in 2016 and has exploded to the point that it has over 1.5 million followers. The sentient robot even has its own music career.

The robot has been interviewed by numerous publications including Vogue, Buzzfeed, the Guardian, and the BBC. Robots are really stealing all of the jobs, even Instagram influencers.