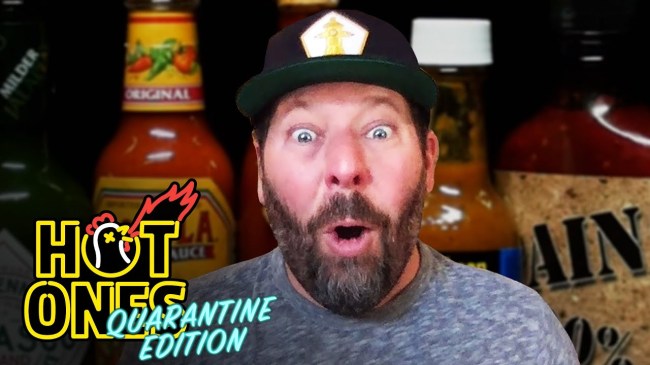 Look: I’m a fat, grizzly guy with a beard who loves beer, jam bands, and cheeseburgers. I hate wearing shirts, despite my tubby IPA rolls. I’m basically a three-day-old cinnamon roll in the flesh.

What I’m trying to say here is that comedian Bert Kreischer preaches the gospel of my people.

I’ve enjoyed going deep on Kreischer’s comedy specials during the quarantine: My girlfriend and I started with his most Netflix recent special – Hey Big Boy – during the first week of shelter-in-place, right when it came out. Then we dove in: The Machine, which concludes with his incredible, bat crazy story about robbing a train with Russian mobsters while in Moscow on a study abroad trip. Also: Bert Kreischer: Secret Time on Netflix, his Rogan episodes, his Comedy Store charity appearances with Tom Segura, The Bertcast, etc.

And then he did that now-notorious interview with Adam Sandler, in which he referred to Sandley’s performance in Uncut Gems as Precious Gems and Sandler just rolled with it.

We are, like, Bertheads now, which is a weird thing to say but the dude is absolutely owning the content creation game during the quarantine. His goofy, self-depreciating takes as a dad are relatable – even those of us who haven’t spawned! – and endearing as hell.

Also: Gotta respect a man sponsored by Buffalo Trace, one of the best bourbons out there.

Kreischer just teamed up with Sean Evens for the very first episode of Hot Ones, devouring chicken wings with progressively spicier hot sauces. At the end, he’s in tears, per Hot Ones tradition.

It’s familiar territory for Bert, the very first comedian to ever do Hot Ones back in 2016.

The episode kicks off with Hot Ones host Sean Evens asking Kreischer about how the quarantine is going to change the live comedy business in a very real way when everything gets back to normal again.

“It’s going to redefine touring for a lot of comics. You look at it – There’s 400 touring comics in theaters. All of those 400 comics are going to be struggling to get the same theaters in the last six months of the year. That means 200 comics who are theater acts are going to clubs.

And what about comedy clubs?

The onus is on guys like myself, Bill Burr, Tom Segura, Joe Rogan – all these guys who are doing bigger numbers – to go in on Monday, Tuesday, and Wednesday to make sure they can pay their mortgages and rent – so all these waitstaff can pay their bills.”

As a live comedy dork, that fallout is a grim picture for “the scene.”

Here’s Kreischer in the full Hot Ones episode. It’s worth the 20+ minutes.

Seriously – If you haven’t watch Hey Big Boy yet on Netflix, do it right now.

You *almost certainly* have nothing else better to do.