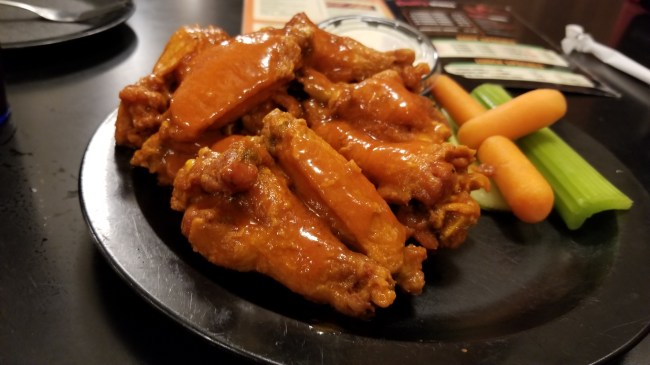 The city of Buffalo is really only known for three things: being close to Niagara Falls, having two professional sports teams, and creating the Buffalo wing. Conveniently my visit to Buffalo was only a few days before National Chicken Wing Day, so it was only natural that wings were my number one focus while in town. I knew I really only had two meal windows to eat the local cuisine so I decided to maximize my experience. I extensively researched the best options within a reasonable distance of downtown and came up with four restaurants that stood out from the rest. I then hit two of them for dinner and two of them for lunch the following day. I’m probably good on Buffalo wings until football season, but I definitely have some strong opinions on what I sampled. For the purpose of keeping everything fairly ranked, every order of wings was at medium heat. I didn’t eat them with blue cheese or sour cream because I was here to eat the wings and not eat wings covered in a bunch of things that mask the taste of the actual wing.

Here are the rankings of the best wings in Buffalo, New York, the chicken wing capital of the world. 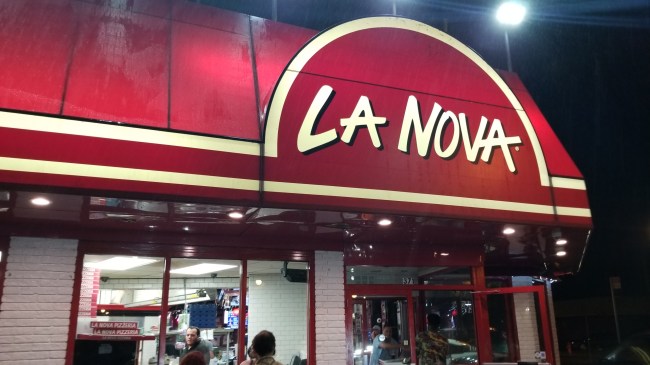 I didn’t know Buffalo had its own style pizza, but I figured that out once I started doing research on LA Nova. I do, however, need to stay focused here because we’re talking about wings. Despite being a Pizzeria, La Nova had a reputation for providing local with some of the best wings in the area. It looks like your standard pizza place with ample seating in front of numerous big screen TVs. The first thing I thought about was would this be a good place to watch football on Sundays. The wings took longer to come out than at any other restaurant despite the fact that there weren’t that many people there, but that wouldn’t be an issue if the wings were elite. 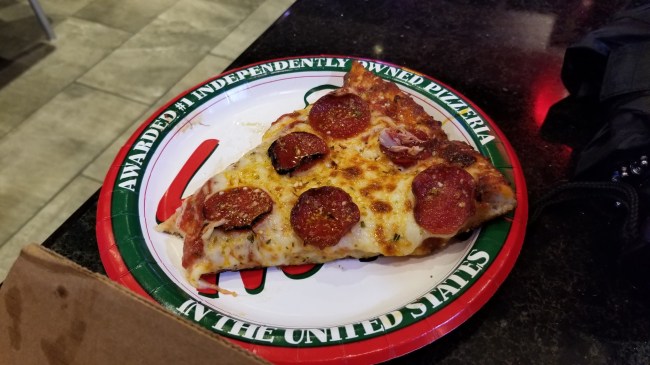 Unfortunately with the raised expectations, these wings didn’t deliver enough for the wait. There were just ok. They were appropriately crispy and there was enough meat on the bone. They even threw an extra wing in there for me. But the sauce didn’t have the same flavor as the other wings I tried. They weren’t completely overwhelmed with sauce, which is what I saw at a couple other locations, but I’m generally ok with that if the wings contain enough of sauce. The sauce just needs to pack some punch and these wings didn’t have that. They are certainly passable wings that you could eat and enjoy, but your expectations are raised when you’re in the city that created Buffalo wings. (As a side note: I tried the pizza as well and it was more flavorful than the wings, but it wasn’t a slam dunk either. The crust was along the lines of a better version of Dominos.) 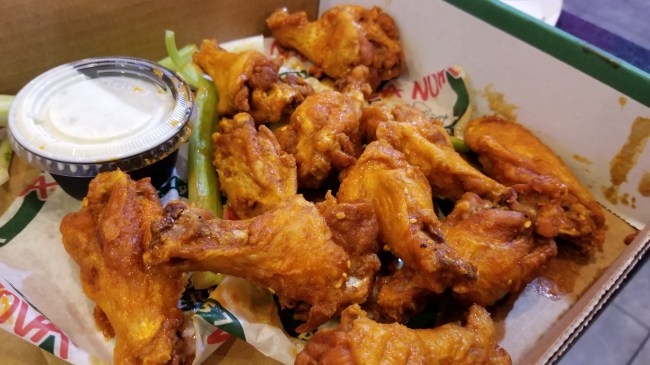 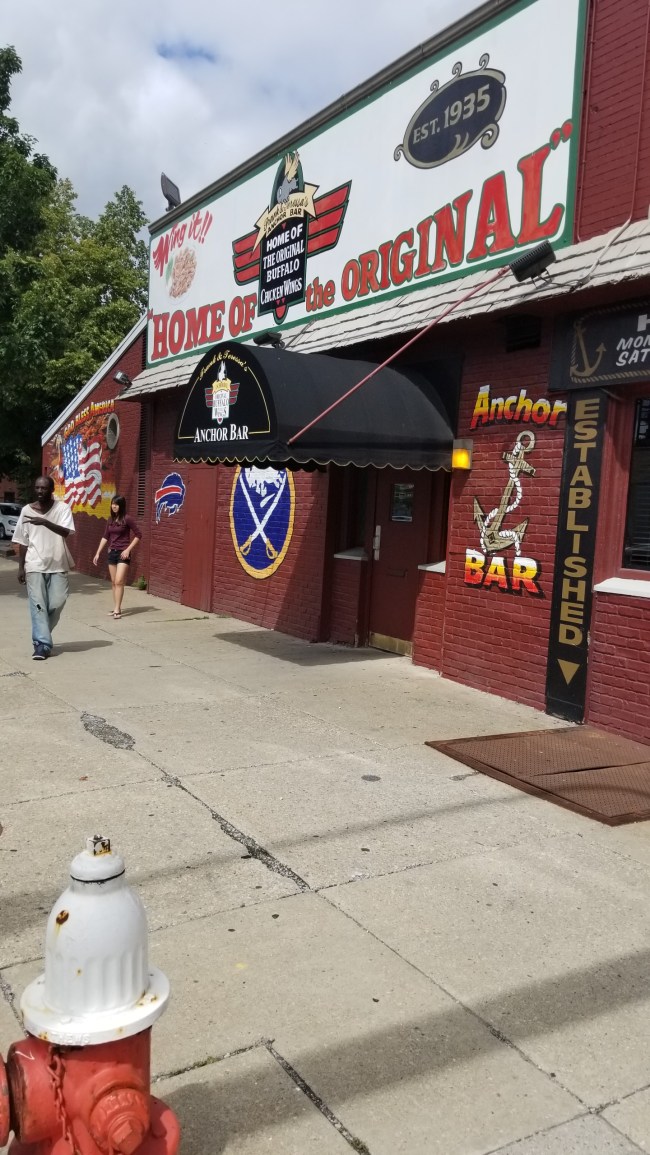 Anchor Bar has the name appear in the Buffalo wing circuit because they invented the Buffalo wing. As with the Juicy Lucy in Minnesota and the French Dip in Los Angeles, there’s some controversy over who was first to the chicken wing market, but the argument seems to lean in Anchor Bar’s favor. The vibe of the place is cool as it looks like your typical old school bar with the wooden paneling, tables, and chairs. I was impressed by the fact that the place was packed at 2:45 p.m. on a Tuesday, but that’s what the name recognition brings. I sat at the bar in order to expedite my order. 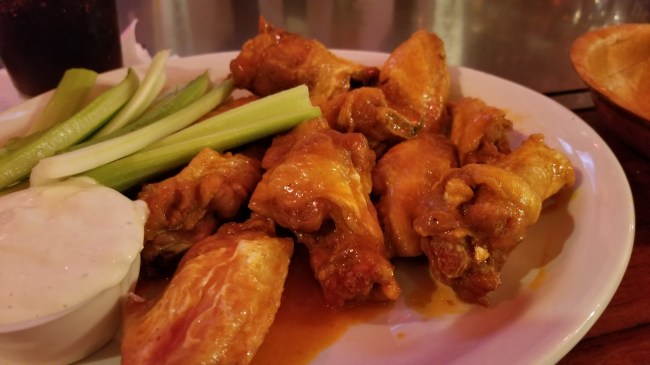 Word has been circulating in recent years that despite creating the wing, Anchor Bar’s product isn’t as some of its competitors. These rumors I heard before my arrival turned out to be true. The wings were good wings, don’t get me wrong. You could go to Anchor Bar and thoroughly enjoy the experience if you hadn’t sampled other wings in town. If you ate the Anchor Bar wings at your local sports bar then you’d be very happy. They have the right amount of sauce, crisp taste, and meat on the bone. They can take pride in the fact that they’re still serving a quality product, but if you’re only going to eat at one spot in Buffalo then you might as well pass on Anchor Bar. (On another side note: I also tried Beef on Weck, which is the other signature food item in Buffalo. It’s very similar to a French Dip being that it is roast beef on a kummelweck roll pre-dipped in au jus and served with some horseradish spread. If you’re a fan of meat and sandwiches then it’s worth trying one of these too. 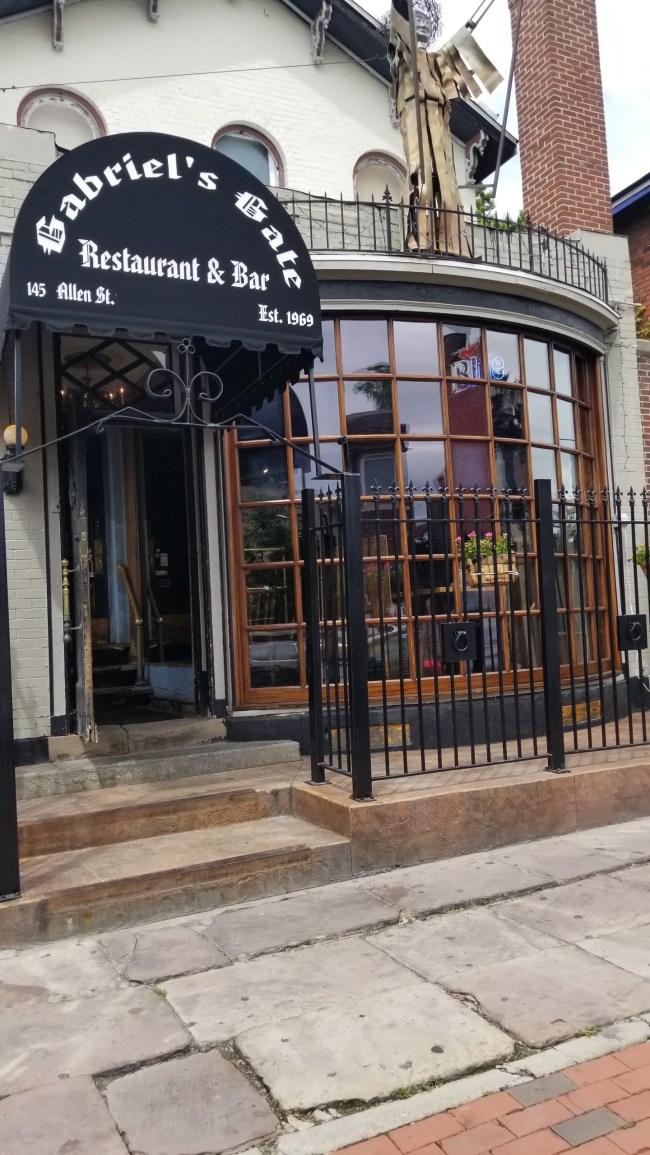 I’m going to start off by saying that the top two were very, very close. They were both in the conversation of the best wings I’ve ever had. Both restaurants really know how to make a Buffalo wing. With that said, Gabriel’s Gate lands at #2 on this list. It doesn’t have as much name recognition as Anchor Bar or the #1 choice in the rankings, but it’s the place that most locals tell you to go to. It’s got an older look than Anchor Bar with the wooden booths and various accoutrements on the walls. Unlike Anchor Bar, it was very empty at 2 p.m. on a weekday afternoon. The menu is vast and supposedly very good as well, but we, again, are here for the wings and nothing else. 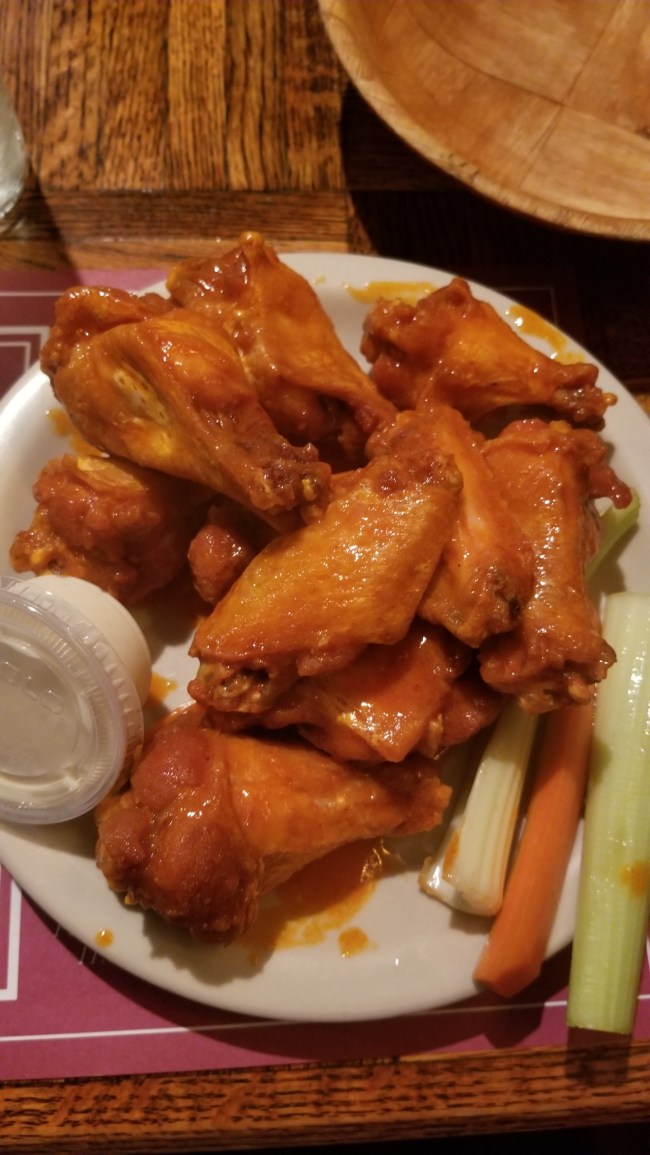 The wings came out piping hot, with the wooden disposal bowl covering the plate of wings. Steam rose from the plate as I removed the wooden bowl and that got me a little excited. The wings were covered in the most sauce of any wing I tried. So much so that there was a nice layer of sauce on the plate even after I finished the wings. I smiled immediately after locking in for my first bite. The locals were right. These were elite-level wings. You could dump anything in that sauce and be happy about it. It was weighted perfectly between heat and flavor. Of all the wings I ate, these might’ve had the most meat on the bone. The convenience factor is also a plus because of the downtown location. 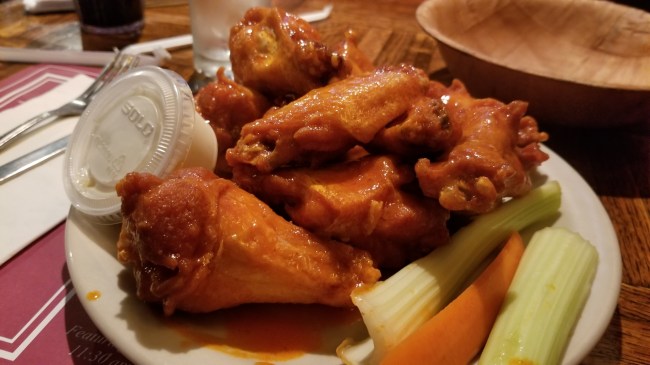 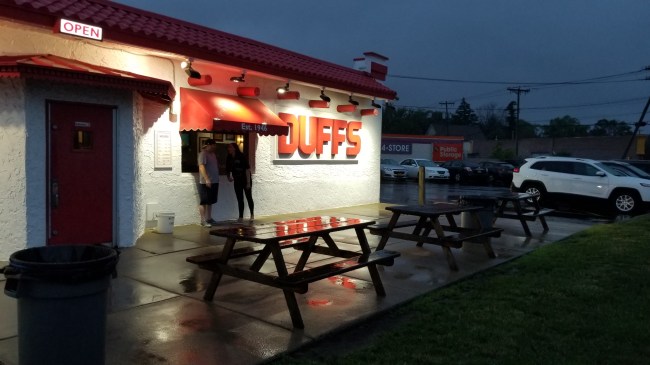 Other than Anchor Bar, Duff’s has the most name recognition in the area. There are multiple locations of Duff’s in the area and it’s even expanded outside New York to nearby Toronto and random cities in Texas and Georgia. I’m not sure how I feel about this expansion, but I figured I’d put that aside and venture off to their original location. It’s not that convenient if you’re just visiting Buffalo (it’s in the nearby town of Amherst), but thankfully Uber was introduced to the market recently. It looks like your stereotypical no frills bar/restaurant on the side of the road in America. I was happy to see if was busy at 8:45 p.m. on a weeknight. The locals clearly were fans of Duff’s. 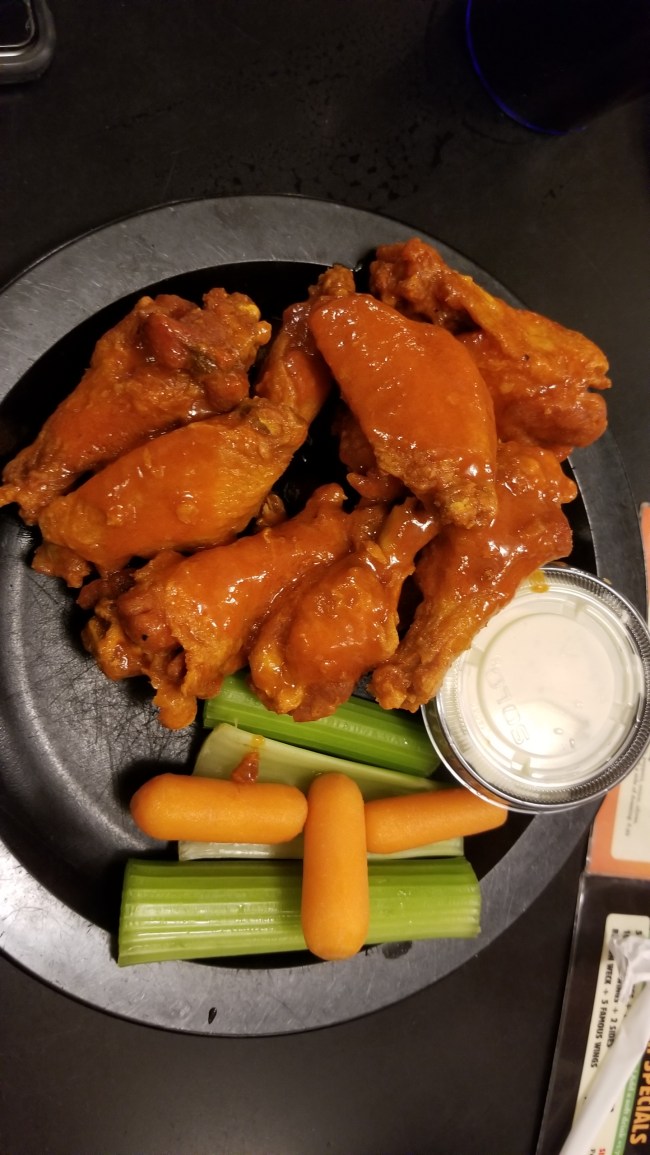 Duff’s warns you that there medium is hot. I found out later that their medium light is more like a regular medium. (Why restaurants do this is beyond me. If your medium is hot then why not appropriately name that level hot. It’s semantics, but it seems simple.) I was mildly worried that they’d be too much for me, but I dove into my plate with abandon. The wings delivered on all counts. There was enough sauce, but not too much. Every wing had just the right amount of sauce and that sauce definitely packed a punch. It was on the hotter side, but it certainly wasn’t too hot. There wasn’t a wing in the bunch that lacked meat or tasted off. They also came out of the kitchen very fast, which combined with the quality tells you they’re committed to getting the best wings in their customers’ hands as quickly as possible. What more could you want?

Gabriel’s Gate and Duff’s are definitely neck and neck. You’ll really enjoy both places. One is more convenient than the other and you’ll get a different response depending on who you ask about their favorite wing. But Duff’s gets the nod for me and now I find myself looking at their website, wondering if the wings they make available for delivery around America is even half as good as what I ate in person. 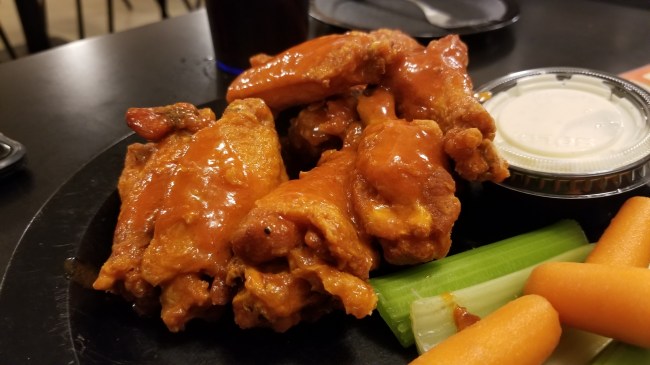