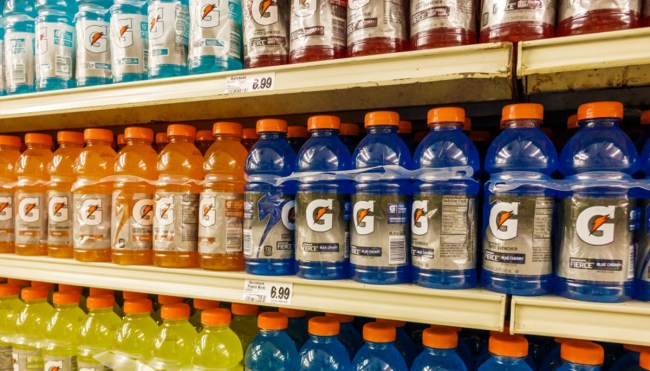 If you’ve ever seen the commercial below, then you’re likely aware that doctors at the University of Florida dreamed up one of the most revolutionary inventions of the 20th century when they introduced the team’s football team to the “carbohydrate-electrolyte beverage” in 1965—one that was dubbed “Gatorade.”

Since then, the sports drink has become the ultimate thirst quencher for athletes, hungover college kids, and anyone else looking for a way to rehydrate with the help of the nutrients and electrolytes they (and the plants) crave.

Before I lay out my ultimate guide to the best Gatorade flavors based on their situational qualities, I want to make something clear. I don’t hear the shouts from new-wave flavor fanatics yelling some hogwash about Cucumber Lime or Strawberry Kiwi or even Green Apple being the GOAT of all Gatorades (the same is to be said about how G2 “changed the game” when it comes to a list like this.

The random flavors of Gatorade that have emerged over the years that pop up at obscure delis and random gas stations every once and a while can be tasty. But, they have no business in this power-ranking of best Gatorade flavors.

Here at BroBible, we are dealing with the best day-to-day Gatorade flavors that you can get almost anywhere. They’re not necessarily the original flavors, but the ones that everyone not living under a rock for the last 20 years A) know exists and B) more or less has an opinion on.

I will also consider the gravity of the situation and parallel it with a Gatorade flavor’s magnitude. There is a time and place for each Gatorade flavor, and I’m about to let you know what those are.

If you don’t think there’s a time and a place for a specific Gatorade flavor, just ask yourself this: would you drink Corona around a campfire? Would you drink Guinness on a boat? Would you drink Molson on the 4th of July? The answer to all of these questions is obviously a big, fat NO.

As I said above, we’re really only paying attention to the quintet of the best flavors that stand a tier above the rest, but I’d be remiss if I didn’t briefly acknowledge the merits (or lack thereof) of those that didn’t make the cut. 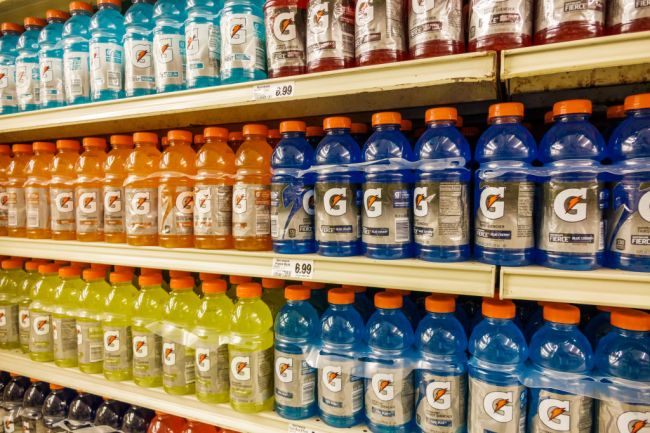 I’m not going to be around the bush when I tell you that Fruit Punch (a.k.a. Red) is undoubtedly the worst Gatorade flavor. Now, I know some folks who live and die by the punch, but I think we all know that those people suck.

It’s a juice box Gatorade. If your first choice is the devil-piss we call Red Gatorade, then I’m just going to assume that your favorite band is Daughtry and that wear a beanie when it’s hot out.

I put Cool Blue Gatorade half a notch above Fruit Punch only because it does not leave a red rainbow on your mustache.

The name “Cool Blue” is deceiving because it sounds smooth and elegant. But in reality, it tastes as if each sip weighs 10 pounds. Cool Blue is bloating, filling, and has a drowsy effect. What is it, decaf Gatorade?

Also, what exactly is “blue” anyway? Is it supposed to be some sort of blue cherry? Maybe berry?

Everything that can be said about Cool Blue can also be said about Fierce Grape (dark purple). There’s just no getting around the fact that these flavors are second-tier; the equivalent to the music fraternity on campus. Lame.

Now, Without further adieu, here’s a ranking of the best Gatorade flavors based on their use in everyday life for hydration.

5. Glacier Cherry (The White One)

This flavor is a fantastic second-string player. When you’re picking up two Gatorades, you can’t go wrong with snagging a crisp Glacier Cherry as a backup—but you can also do a bit better.

It seems like the only good time for Orange Gatorade is out of a paper cup on the sideline or in the dugout. It has to be freezing cold for it to be refreshing.

Is it terrible? No, but drinking an Orange Gatorade casually is grounds for being called a weirdo. Orange just doesn’t have enough oomph to get it higher. There are just not enough times where it beats the rest of the flavors to the front line of thirst-quenching. 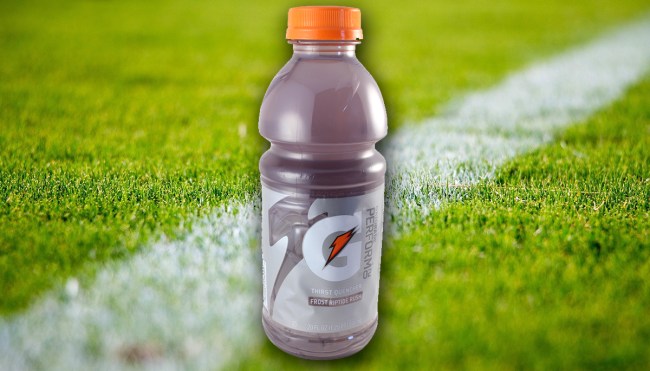 This is a fantastic and versatile flavor. Riptide Rush is night owl juice. I feel like whenever I’m buying a Gatorade at night, it better be light purple.

Got a 9 PM intramural basketball game? Riptide Rush. Road trip? Riptide Rush. Something about being on the move makes my pallet yearn for some light purple.

There is also something about it that says “I’m relaxed” I’m going to take my time drinking this… I’m not super thirsty right now, but I know I will need a sip of something eventually. 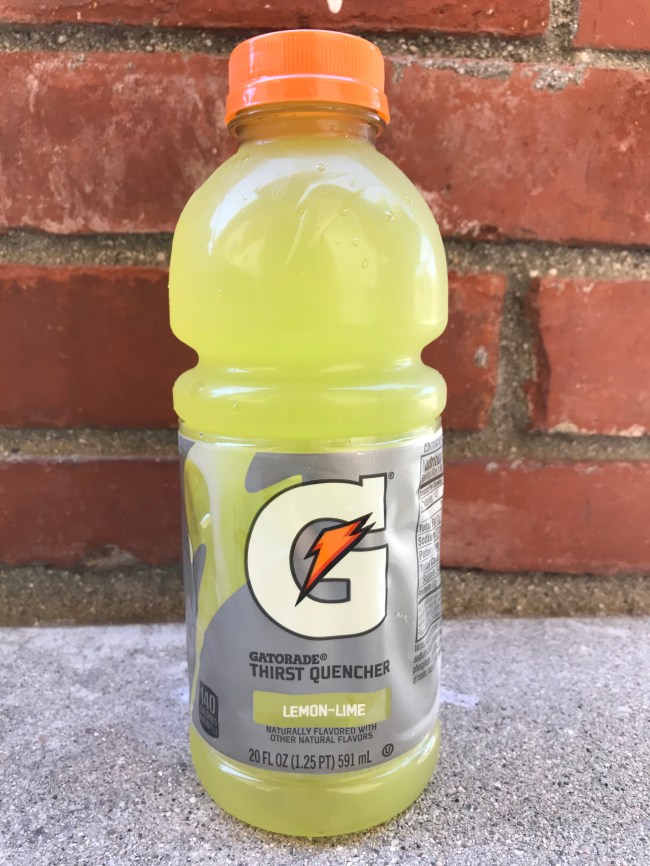 Next up we have the Gatorade that was designed and engineered to quench the thirst of the 1965 Florida Gators. Yellow Gatorade was literally designed to be consumed while exercising. If you’re going to practice, a game, or the gym, you better have an ice-cold Lemon Lime on deck.

Yellow is not only for when you’re exercising, it’s for when you’re sick—not hungover-on-the-couch-and-trying-to-rally sick. But actually sick, with a fever and the shakes. Like, can’t get out of bed so you ask someone to bring you a yellow Gatorade because the light citrus is literally all your stomach can handle.

These are two HUGE reasons are why Lemon Lime is the second greatest Gatorade flavor of all time. 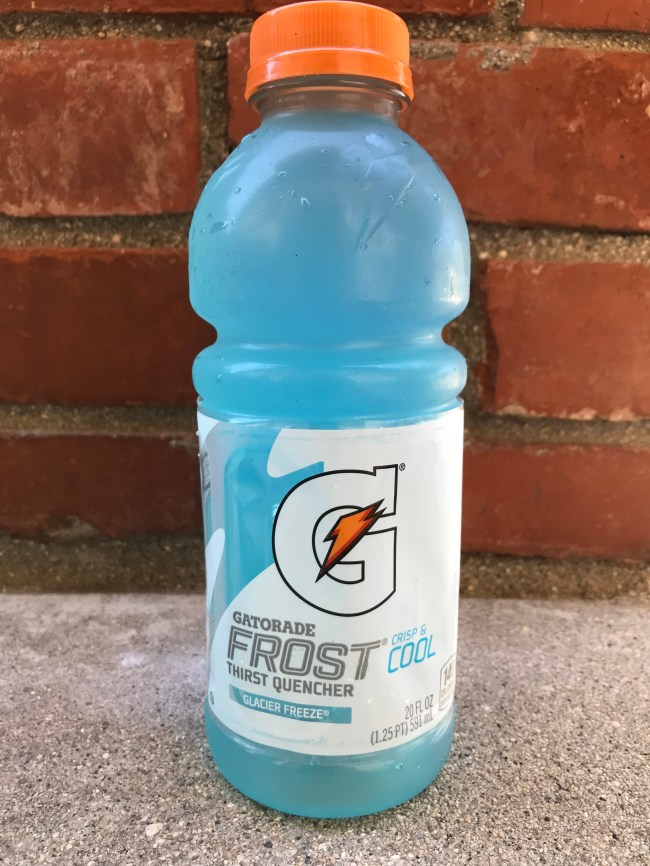 Coming in first place is without a doubt Glacier Freeze.

This flavor is easily the most diverse thirst quencher. If Juul put out a Glacier Freeze pod, I think we all know that it would end up being the Pineapple Express of pods. Hung-over? Glacier Freeze. Spicy food? Glacier Freeze. Just thirsty? Glacier Freeze. The sweet taste of this heavenly elixir never gets old. From mixing our parents’ vodka with it to drinking it to stay alive through an all-night finals week Adderall binge. Glacier Freeze never lets us down.