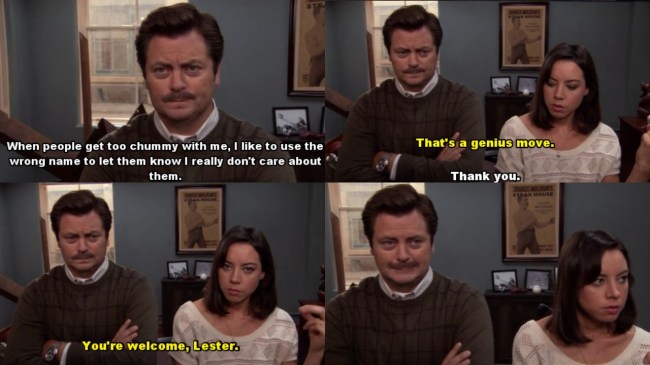 There are some people out there, myself included, that sling the admittedly steaming hot take that Parks and Recreation is actually superior to The Office.

Now, if you disagree with that scorching hot truth bomb I just dropped on you, that’s totally your prerogative (speaking of prerogatives, watch this, trust me) — believing that The Office is better than Parks and Rec is a reasonably respectable shout.

But what you can’t deny is that Ron Swanson, the iconic Libertarian outdoorsman played by Nick Offerman, is one of the greatest characters in the history of modern American sitcoms.

That’s what ultimately makes Parks and Rec more enjoyable than The Office to me: the depth of the supporting cast.

In a cast that featured Saturday Night Live legend Amy Poehler and soon-to-be international movie star and Marvel superhero Chris Pratt (in addition to the likes of Aziz Ansari, Rob Lowe, Rashida Jones, and Adam Scott), it was two of the lesser known actors that consistently stole the show: Offerman as Ron Swanson and Aubrey Plaza as April Ludgate.

Once the Parks and Rec writers realized the true comedic potential of the two characters, Ron and April became responsible for some of the show’s most bitingly hilarious moments, especially when the two were sharing a scene.

And as fate would have it, Offerman and Plaza actually share a birthday — today, June 26 — which gives us the perfect excuse to wind back the clock and mindlessly procrastinate at work with some of Ron and April’s best moments on Parks and Rec.

Shockingly enough, Parks and Rec just celebrated its 10-year anniversary back in April, as the entire cast and crew sat down for an hour-long panel to discuss all things Pawnee: