‘I DID NOT DROP BABY YODA!’ Bill Burr Exclaimed As He Blamed ‘The Robot Dude’ 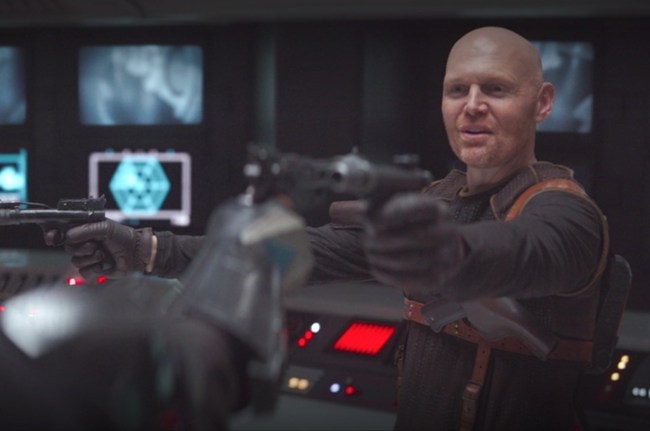 If you’ve been keeping up with my reviews of The Mandalorian — you can find them all here — then you know I’ve been a huge fan of the series so far. (And if you haven’t been keeping up with them, fair play to ya mate, I respect your honesty. This article remains funny all the same.)

In fact, there’s been some points in this largely excellent first season that had me wondering if the series is the best Star Wars content that’s been released in my lifetime.

However, all that praise notwithstanding, I have been critical of a couple of the episodes thus far, most notably the episode that featured Bill Burr, “Chapter Six: The Prisoner”

Look, I enjoy Bill Burr as much as the next guy, but that’s kind of the issue: he’s Bill fucking Burr. I’m trying to enjoy this Western in space and next thing I know there’s a balder than ever Bill Burr slinging around his thick ass Good Will Hunting-on-repeat clam-chowder-slamming Tom-Brady-slurping Boston accent. Takes me wayyyyy out of the zone.

And, to be fair to my buddy Bill, that’s totally not his fault. He’s an alright actor, he’s a generational stand-up, the guy is clearly talented. But it’s essentially the same thing as Al Pacino popping up and doing his best Scent of a Woman hoo-ahh or Robert De Niro looking into the camera and asking if you’re talking to him — some actors have a personal presence that is simply too strong for the galaxy far, far away.

Anyway, that was my rant about Space Burr. Onto the reason you’re all here, the real moneymaker of The Mandalorian, Baby Yoda. And, by the way, SPOILERS FOR THE MANDALORIAN WILL FOLLOW, so stop now if you haven’t caught up.

In Chapter 6, Burr’s epically douchy character Mayfield more or less drops Baby Yoda on his precious green and wrinkled dome piece while on the way to a mission with The Mandalorian. But, as Burr made clear on the latest epsidoe of his Monday Morning podcast, it was not his fault.

“Alright, so here’s the deal, I didn’t drop the Baby Yoda. The fucking robot dude came out of hyperspace and he didn’t tell anybody. Alright? Until you’re in hyperspace holding a fucking baby and some robot — like that’s not unsettling enough — is driving the fucking thing and slams on the brakes, let’s see how you do. Walk a mile in my fucking space slippers before you fucking come at me.”

A brilliant move by ole Bill here, as if there’s anything that has the ability to unite humanity, it’s the existential threat of our own robotic creations becoming our eventual haphazard overlords. Still, given the ferocity of the internet’s love for Baby Yoda, it’s unlikely he’ll ever live that one down.

The Mandalorian is now streaming on Disney+, with the season one finale set to air on Friday, December 27.