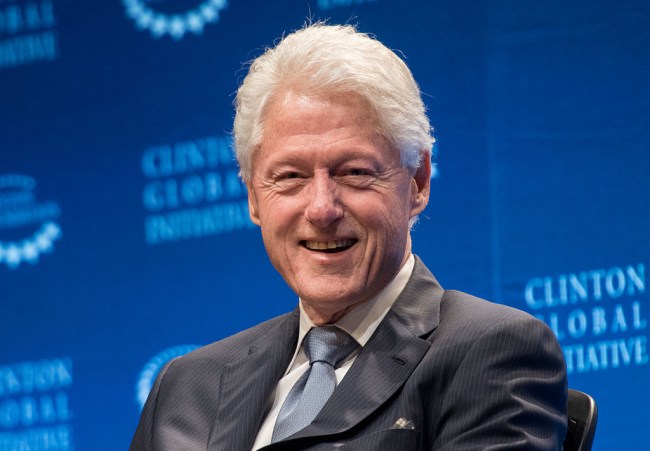 The perplexing case of convicted pedophile Jeffrey Epstein somehow just got even more bizarre. According to a witness, Jeffrey Epstein had a “sexual picture” of former President Bill Clinton wearing a blue dress hung inside the alleged sex trafficker’s $56 million Manhattan mansion.

The Daily Mail is reporting that a woman who visited Epstein’s mansion in October of 2012 took a photo of an eye-opening piece of art.

The portrait shows Bill Clinton wearing a blue dress with red high heels while provocatively lounging on a chair in the Oval Office. The blue dress is significant because it is similar to the infamous dress that Monica Lewinsky wore during the well-publicized sexual affair that they had in the White House. Let’s hope that Bill’s dress is free of stains.

Why did Jeffrey Epstein have this painting of Bill Clinton wearing a blue DRESS and red heels inside his mansion? https://t.co/NGOcsGAIN5 pic.twitter.com/QMlOvKSh9g

The anonymous woman claims that she was inside Epstein’s Upper East Side townhouse in 2012 along with her business partner. The hour and a half business meeting was arranged by Epstein’s then-assistant Lesley Groff.

In the house, there was an open door of a room off the stairway and that is where the woman said she saw the picture. “It was through a door that had been left temporarily open by his housekeeper or butler,” the woman alleges.

“It was absolutely Bill Clinton. It was shocking – it was definitely a painting of him,” the alleged eye-witness told Daily Mail. “It was a very provocative, sexual picture. He was wearing heels, a blue dress and his hand was in a weird position.”

The woman alleges that her business partner took the photo despite being “mortified” to do so because there “were cameras everywhere.”

“We were met at the door of Epstein’s penthouse by a butler. He had a real butler – an old gentleman who walked with a limp,” she claims. “He led us to Lesley’s circular office. She was beautiful and fabulous and so nice and bubbly.”

“Then she led us into Epstein’s private quarters which is when we passed by the open door and the portrait,” the woman said. “We went into his dining room and spoke to him about the proposal.”

The source also said that she saw a “young Hispanic girl waiting to meet with Epstein after her business meeting.” The witness alleges that the girl “looked about 14.”

The Daily Mail has seen the metadata of the photo and said they can verify where and when the photo was taken.

The @DailyMail verified with metadata that this portrait of Bill Clinton in heels and a blue dress while sitting in the Oval Office was hung in Jeffrey Epstein’s Manhattan home… Thoughts?

The FBI compiled reports on “34 confirmed minors” who alleged that Epstein molested them according to Politico. In 2018, the Miami Herald identified nearly 80 victims of Epstein’s abuse.

In May 2006, Epstein was charged with four counts of unlawful sex with minors and one molestation count by the Palm Beach Police. The billionaire businessman pleaded guilty to one count of soliciting underage girls for sex (and one count of adult solicitation) in 2008.

On July 6, 2019, Epstein was arrested in New Jersey and two days later was charged with sex trafficking and conspiracy to traffic minors for sex.

On August 10, 2019, Epstein was found dead from an alleged suicide in his prison cell at the Metropolitan Correctional Center (MCC) in New York City. Epstein’s death is extremely suspicious considering how important of a witness he could possibly be.

There have been reports alleging that Epstein is connected to very powerful people around the world including heads of state and celebrities, who he would reportedly supply underage girls to for sexual purposes.