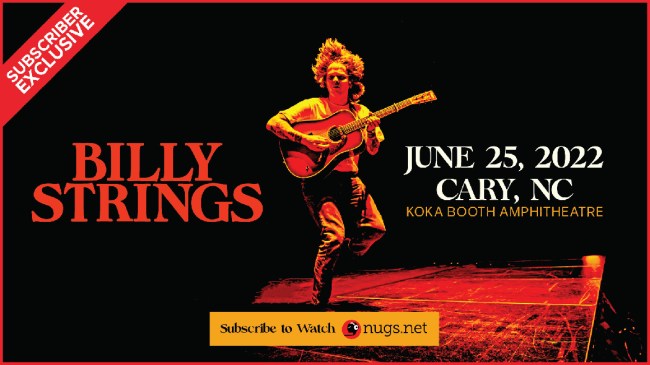 Here’s a nice summer treat this weekend: A Billy Strings live stream from Cary, North Carolina. Unlike other PPV shows, this one is on the house for nugs.net subscribers.

Tonight, Saturday 6/25, Billy is performing live from the Koka Booth Amphitheatre, Cary, NC. Showtime is 7:30 ET. All you have to do is have a nugs.net account to watch. More details + tune-in information right here.

Don’t have a nugs.net account? Here’s why it’s one of the best subscription services out there for live music fans.

This is a generous move by nugs.net and Billy. Usually, you have to pay for a Billy String live stream beyond the price of a subscription.

And last night’s setlist was a scorcher. Billy Strings covered the late, great Jeff Austin on the anniversary of his tragic death in 2019 with Run Down. He also featured Black Sabbath’s Planet Caravan and Little Feat’s Willin’.

And Am I Born to Die, Run Down, Willin’, Don’t Let Your Deal Go Down.

Also on nugs.net tonight, but for a price: Widespread Panic, live from Red Rocks at 9PM ET and Dead & Company, life from Wrigley Field starting at 7:30PM ET.