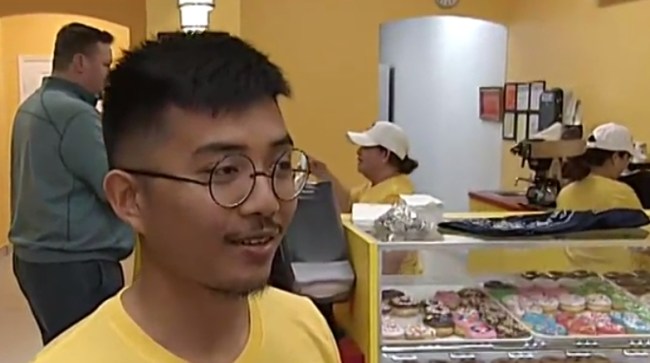 Social media is generally a hellscape of demagoguery, a boiling sea of unwanted opinions, and a flood of unhealthy self-obsession. But every so often something beautiful happens on social media. This story of a son helping his dad’s business is one of those rare wins.

A son and father were excited to open a new donut shop in Missouri City, Texas last week. However, the foot traffic was lacking during the grand opening of Billy’s Donuts. Then the son swooped in to save the day with one single tweet.

My dad is sad cause no one is coming to his new donut shop 😭 pic.twitter.com/y5aGB1Acrc

Soon, EVERYONE wanted to grab some yeast rings from Billy’s Donuts, even people who didn’t live in Texas, even people who didn’t live in the United States. The tweet grabbed the attention of Twitter, actor James Woods told his two million-plus followers to help out, and Casey Neistat told Billy and his nearly two million followers that he’s “on my way.”

You donut want to miss out on Billy’s and neither do we! We’ll be there tomorrow morning 🍩♥️#LoveTwitter https://t.co/NpTAXW4R53

Come on, everybody. Let’s do this. Address, please? @hibillyby https://t.co/adhQXY4Mq2

Soon enough, there were lines out the door and they were selling out of their donuts and kolaches, a Czech pastry that has fruits, cheese or meats inside.

A tweet of Billy By's lonely dad at his new doughnut shop in Missouri City drummed up business today.

Twitter even paid for everyone’s donuts until they sold out.

Thanks to this tweet, folks are streaming into Billy's Donuts. This morning, @twitter is taking care of your tab. https://t.co/7DkW2nT2iU

“You are all amazing,” Billy wrote on Twitter. “I can’t thank everyone enough for coming out and supporting local businesses. This means so much to my family.”

Thank everyone so much! We sold out today! We appreciate all the love and support. My dad isn't sad anymore! ❤️❤️❤️

Dad wasn’t sad anymore! Good job by everyone, more of this on social media, please.