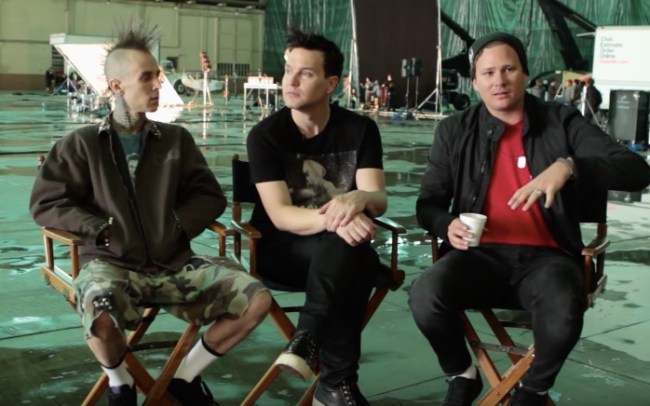 If you’re reading this then chances are you pronounce Blink-182‘s band name correctly. I’m basing this assumption on the fact that I’ve been watching the BroBible web traffic for years and know that while we have plenty of overseas readers the majority of our readership comes from North America.

How you pronounce the band’s name depends on where you live and a Twitter user unexpectedly went viral after discovering that everyone outside of North America is pronouncing Blink-182 like a serial killer.

We know that the true pronunciation is ‘blink one eighty-two’ because the band’s been a part of American culture for decades now and many of us have seen them live in concert. What we don’t know is why these Britons are sticking to their guns on the mispronunciation despite knowing that it’s ultimately up to how the band themselves pronounce it which is ‘blink one eighty-two.’

There’s a Twitter Moments thread devoted to this war of pronunciations and while it’s obvious the Brits don’t stand a chance here I appreciate their feistiness in defending their perceived proper pronunciation. Still, I’m confused as to how Blink-182 wasn’t all over the BBC’s version of Total Request Live in the late 90s and early 00s, whatever that show would’ve been called It’s not like they haven’t heard the band’s name said aloud until now, is it?

The British call Blink-182 “Blink One Eight Two” and I’m not saying that’s WHY they lost the Revolutionary War, but…

Several people chiming in wondering what we call them stateside.

This is a sweeping generalisation. (But tell me what you guys call it for reference.)

What?! What do you lot call them?

This, my dudes, is the proper pronunciation.

This will be the raging river our friendship cannot bridge.

If it’s a number it’s one hundred and eighty two, if it’s figures it’s one eight two.

One eighty two just doesn’t exist as an entity in the English language, fam.

I get that this is a stretch, but when something costs $1.82, I'd say "one eighty-two", so it's not entirely non existent

I appreciate the effort in trying to rationalize why they’ve been saying it wrong all these years but they still need to admit that they’re wrong. It’s one eighty-two.

Definitely a stretch. That’s because it’s 1 dollar 82 though. The . makes all the difference.

Of course, this jabroni got involved. No matter how loudly they say it, they’re still wrong.

Don’t start this. I admit we are wrong on this. America calls them Blink One eighty two. Which is also wrong. They technically should be called Blink one hundred and eighty two. Don’t take some moral high ground here. https://t.co/zm2Gpb6xtT

This has always befuddled me, even as a generally British-linguistic-leaning Canadian.
In any case, I love it all – the band, the music, the Brits…let's not fight. https://t.co/3GDzzC7nrf

The better question is, what happened to the first 181 Blinks?

Again, this is very odd to me because I have to assume that a lot of people in the UK have heard at least one of the band members refer to the band as Blink One Eighty-Two before. Or they’ve heard the name said on TV at some point.

This is so much worse than the O.A.R. vs. OAR pronunciation wars of the 00’s when the band got sick and tired of everyone calling them OAR so they pivoted hard to being Of A Revolution or O-A-R. Blink 182 is BLINK ONE EIGHTY-TWO and nothing else. It’s always been this way.