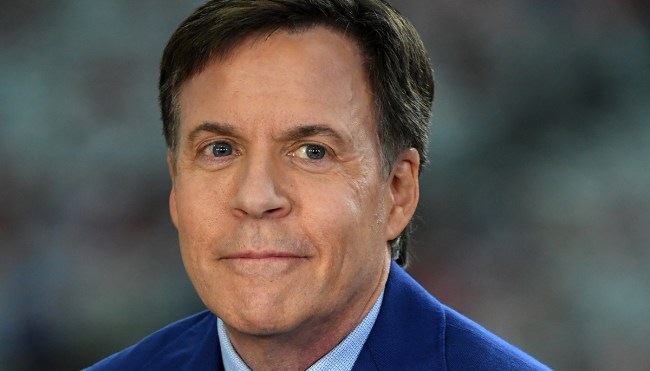 With the possible exception of Jim Nantz, it’s hard to think of anyone currently in the sports broadcasting game who’s had a more legendary career than Bob Costas. Since joining NBC’s reporting team in 1980, the commentator has racked up dozens of Emmy Awards, been front and center at more big games than he could probably even count, and was even one of the people O.J. Simpson attempted to contact during his infamous police chase.

However, as Costas recently revealed, we could’ve been deprived of the Olympics Pink Eye Incident and countless other memorable moments based on an opportunity that presented itself around a decade after he started to make name for himself as a television personality.

On Wednesday, Costas stopped by The Marchand and Ourand Sports Media Podcast and said he almost defected from NBC to CBS in the early 1990s after David Letterman did the same when the network opted to appoint Jay Leno as Johnny Carson’s successor on The Tonight Show over him. As Costas recounted, Letterman attempted to poach him by offering him the hour-long slot following his talk show and even got CBS to throw in a job as a correspondent on 60 Minutes to give him some more incentive.

“When David Letterman left NBC after Jay Leno got The Tonight Show rather than David, and went to CBS, part of the deal was that he controlled the hour after his. Later had followed David Letterman’s show and I had been a frequent guest with David and he and I had a good relationship. And he offered me that hour after his, which eventually went to Tom Snyder when I declined.

“At a different crossroads in my life, I undoubtedly would have done it. But at that time…NBC had a treasure trove of sports riches. I had a very close relationship with Dick Ebersol. Another factor was the ages of my kids and the commuting between St. Louis and New York.

As corny as it sounds, you can say to a little kid, ‘Hey, wanna go to the ballgame? We’ll stand by the batting cage, we’ll say hi to Ozzie Smith.’ ‘Wanna go to the Bulls game? Well, we’ll watch Michael Jordan.’ Or ‘Let’s go to the Olympics.’

It’s a little harder to have a kid’s attitude perk up when you say, ‘I’m interviewing the Secretary of State, wanna come along?’ That was actually part of the decision.”

I think Costas made the right call in the end, but it’s still pretty fascinating to think about what could’ve been.