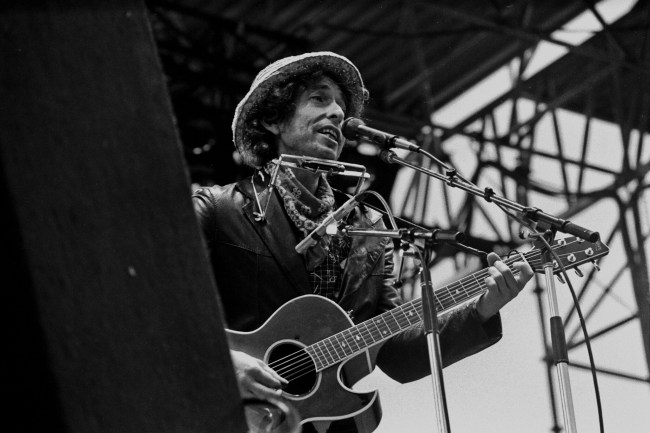 Bob Dylan has been an extremely successful and wealthy man for a VERY VERY VERY long time. He’s been a touring musician for sixty years, has been described as one of the most influential artists of the 20th century, was awarded a Nobel Prize in Literature, launched a personal favorite whiskey brand (Heaven’s Door), and honestly there’s no point in me talking about the never-ending of accomplishments in Bob Dylan‘s life because there are hundreds of books out there to do that for me. The guy’s Wiki page alone is nearly 20,000 words.

Well, he’s just gone from being ‘extremely comfortable’ to ‘exorbitantly wealthy’ and likely doubled his net worth overnight from $200 million to between $400 and $500 million after selling the rights to all of his songs. The actual figures weren’t disclosed but reports estimate the deal to be worth between $200 and even over $300 million, his estimated net worth prior to this deal was $200 million.

The New York Times reported ‘The price was not disclosed, but is estimated at more than $300 million’ while Bloomberg reported the rights to his entire catalog were worth ‘more than $200 million.’ The deal was announced today (Monday) by Universal:

On Monday, the Universal Music Publishing Group announced that it had signed a landmark deal to purchase Dylan’s entire songwriting catalog — including world-changing classics like “Blowin’ in the Wind,” “The Times They Are A-Changin’” and “Like a Rolling Stone” — in what may be the biggest acquisition ever of the music publishing rights of a single act.

The deal, which covers Dylan’s entire career, from his earliest songs to the tunes on his latest album, “Rough and Rowdy Ways,” was struck directly with Dylan, 79, who has long controlled the majority of his own songwriting copyrights.

“It’s no secret that the art of songwriting is the fundamental key to all great music, nor is it a secret that Bob is one of the very greatest practitioners of that art,” Lucian Grainge, the chief executive of the Universal Music Group, said in a statement announcing the deal. (via NYT)

He deserves every penny. Whatever the deal was worth, it wasn’t enough. They should’ve tripled it. The man is arguable the single greatest songwriter in modern history. He has sold hundreds of millions of albums worldwide. They should’ve quadrupled the amount of the deal.

I have no idea if this is true or not but he’s always struck me as a rock star who has enough and isn’t pursuing a billion-dollar fortune. He seems like a guy who is perfectly content being worth hundreds of millions of dollars and doesn’t need to tour 365 days a year later in life to be richer than his contemporaries. I’m sure whatever he got paid for his entire catalog of music is enough to ensure that nobody in his family lineage ever has to work for several generations if that’s the route that’s chosen.

Last week, Stevie Nicks sold a majority stake in her catalog for $100 million. I find it hard to believe any other musicians out there will upstage Bob Dylan and sell for more this year but you never know, it’s 2020 and we have to expect the unexpected.