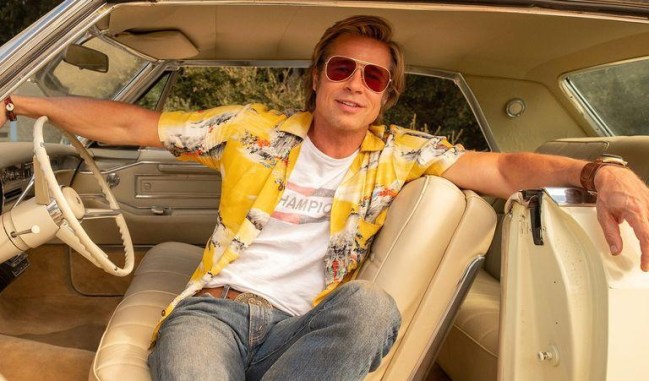 Folks, our boy Brad Pitt is less than a week away from winning an Academy Award and there’s nothing you or I can do about it. The wheels are already in motion. Similar to Doctor Manhattan’s general point-of-view in Watchmen, it’s actually already happened, really.

And with the Academy Award for Best Supporting Actor for his performance as Cliff Booth in Once Upon A Time In Hollywood already in the bag, Pitt has been just uncorking verbal haymakers left and right during his various acceptance speeches in recent weeks.

First, there was his Golden Globes speech at the beginning of the year, where he unleashed the nickname LDC on the world and cracked a timeless Titanic joke — nothing earth-shattering, but a sign of things to come:

Then, while presenting the Once Upon a Time in Hollywood director Quentin Tarantino with the best screenplay trophy at the New York Film Critics Circle Awards, Pitt stunningly quipped that Tarantino is “the only guy I know who needs cocaine to stop talking.” Like I said, haymakers.

Then came the SAG Awards, where cracked jokes about his Tinder bio, his various and infamous failed marriages, and Quentin Tarantino’s notorious obsession with feet:

So Brad Pitt is just catching a major fuckin’ vibe these days huhpic.twitter.com/dkBBGcww3l

But Pitt’s victory lap of comedic excellence didn’t stop there, as he dropped yet another gem on Hollywood from 3,000 miles across the pond last night at the BAFTAs by “welcoming” Britain to the “singles club” and by saying that he’s going to name his trophy Harry (like the Prince) because he just can’t wait to bring it back to the United States. Just absolutely rinsing England about perhaps their two biggest cultural events in the last couple of years within the span of a minute.

Brad Pitt said he was going to name his #BAFTA award ‘Harry’ in his best supporting actor award acceptance speech because he was ‘thrilled to bring it back to the United States’ https://t.co/3xwpDfFVjT pic.twitter.com/Wbd7yPkCu5

Leave it to Pitt to coincide his transformation into a comedic genius with his first-ever Academy Award. Legend shit.