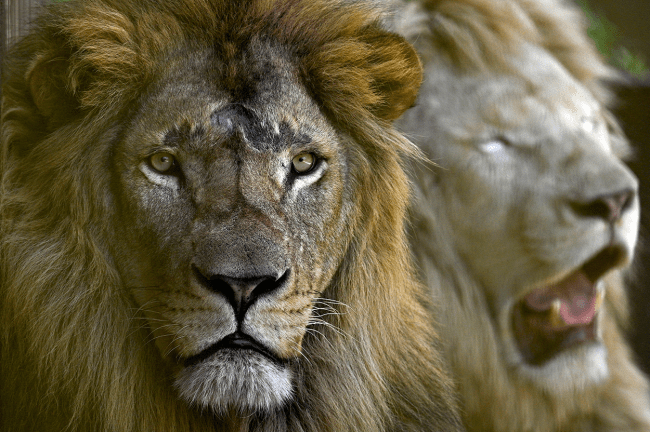 A woman wearing a blonde wig was seen climbing over a barrier at the Bronx Zoo’s lion exhibit on Thursday. Cellphone video of the encounter shows her dancing with roses and tossing $100 bills in the direction of the carnivorous feline.

What she did was very illegal.

In the video, the woman can be heard saying “I missed him so much!” The woman whose husband recorded the video said that the lion lady also proclaimed “King, I love you, I came back for you.”

It is believed that the woman’s remarks are because she may have been there before. The entire, very bizarre, exchange between the lady and the lion was similar to an incident that occurred in September 2019.

A woman named Myah Autry went to the same spot, dressed normally, and taunted one of the cats.

LION'S DEN DANCE: The Bronx Zoo learned that a woman apparently climbed into the lion's exhibit — and danced as a male lion watched from an uncomfortably close distance. https://t.co/zOOmDcGsNA pic.twitter.com/LmHL78bNbr

Autry, who claimed that she was a “reincarnated lion,” was arrested later that year and charged with criminal trespassing. Many people, including the woman who witnessed the latest incident, believe that the blonde-wigged woman appeared to be Autry.

Although the woman’s strange behavior is illegal and remains criminal trespassing, she was still relatively safe. She danced and threw the money inside the exhibit but from the other side of a protective moat that separates the enclosure from the incident.

Here is what the zoo had to say:

“The woman did not enter the exhibit and was never in the same space as the lions which are separated from zoo visitors by a wide moat,” a Bronx Zoo spokesperson said. “The incident lasted only a couple of minutes and the woman was gone when staff arrived on scene. The zoo intends to prosecute the woman for criminal trespass if she is identified.”

Police were able to identify Autry in 2019 when she posted videos and photos of herself inside the lion enclosure.

“I fear nobody. No animal, no human, no one. So no, I wasn’t fearing of the lion because the lion loved me,” she said after the 2019 incident. “That’s why he came to me and I let the lion know: Lion, I love you.”

Autry’s statements from two years ago appear to bear a striking resemblance to what the woman said on Thursday. Perhaps it is the same lady.