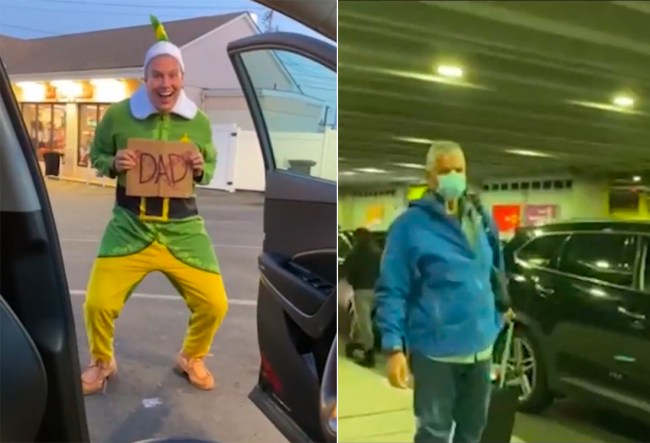 The movie “Elf” is a classic Christmas movie and plays repeatedly on television throughout the month of December every year. Stop any random person on the street and there’s a 90% chance they’ve seen the film.

Doug Henning has seen the film, probably hundreds of times. Enough times to dream up the idea of dressing like Buddy the elf to meet his biological for the first time ever.

Unfortunately, Doug’s real dad, Raul, has never seen the film. This fact becomes apparent when the two met for the first time over Thanksgiving.

Here’s the scene, just in case you’re in the 10% along with Raul.

The Daily Dot breaks down exactly how Doug found out about Raul.

Doug was put up for adoption as an infant by his biological mother, and Raul never even knew he had a son until Doug discovered a biological cousin through Ancestry.com.

From there, the cousin helped Doug get in touch with his biological sister, as well as Raul earlier in 2020.

Their ability to meet in person was hampered by the pandemic, but after spending time talking on Zoom throughout 2020, Doug’s family and Raul were all able to get coronavirus tests and finally meet face-to-face.

Doug’s wife, Rebecca, explains a little bit more behind the first meeting in the comments of the video posted to Instagram.

“So, it finally happened. Since we started this journey with Doug’s first Father’s Day card to his biological dad being one that said ‘congratulations, it’s a boy!’, we figured we’d keep the humor going.

We are so incredibly lucky and grateful that this has happened to our two families, and are thrilled to finally safely meet in person (after all the Covid tests :))

Here’s Doug meeting his dad for the first time, dressed up and singing like Buddy.

“When he came out of the airport, he probably thought I was a lunatic,” Doug told Boston.com. “It was a really good way to break the ice.”

After getting to know one another, Raul finally sat down with his long lost son…and watched “Elf.”

“We ultimately sat down as a family and watched the movie,” Doug said.