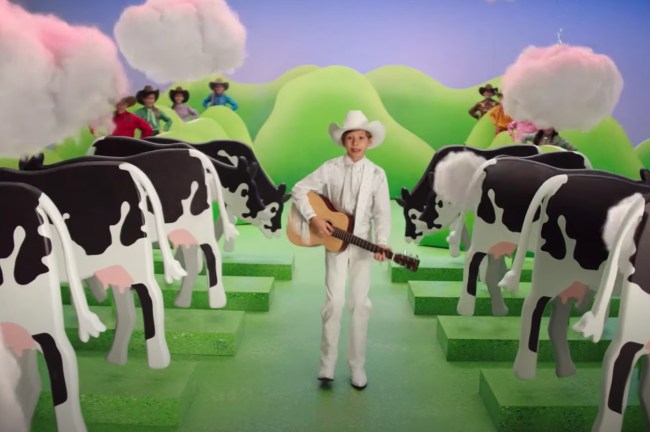 On Monday evening, Burger King fired off a tweet to their nearly 2 million followers that read ‘breathe the farts of change.’ At first glance, a lot of people thought Burger King got hacked. Others were quick to mention that enormous global brands with huge social followings always benefit when they let their young social media managers run free and send out tweets that actually get some attention.

Burger King followed up that juicy fart tweet this morning with an explanation of what was happening and it came in the form of 2020’s Song of the Summer. They got that yodeling kid from YouTube, Michel Gondry, to drop a song about cow farts and burps.

Here’s that first tweet which picked up so much attention last night:

breathe the farts of change

This is all tied into the global brand’s push to reduce emissions by 33% and help do their part in preventing climate change. The fart song is a banger. I’m not even going to lie here, it goes hard.

cow farts & burps are no laughing matter. they release methane, contributing to climate change. that’s why we’re working to change our cows’ diet by adding lemongrass to reduce their emissions by approximately 33%. learn about our ongoing study: https://t.co/kPCXpjfbGL #CowsMenu pic.twitter.com/DnmF8gVVL0

Do I feel weird for writing up an article about a company worth $7.1 BILLION with thousands of locations all across the planet just NOW getting around to making an effort to not be such a burden on the planet? Not really, no. I’m glad they’re finally taking steps in the right direction to combat climate change.

I have absolutely not idea what a 33% reduction in emissions from Burger King would actually look like across the planet or if it would have any effect at all but they’ve outlined their Sustainability Vision here on their website which you can check out if you’re interested.

Did I expect a yodeling kid on YouTube to drop the Song of the Summer and have that song be about cows ripping juicy farts and burps? Absolutely not, but I’m here for it.