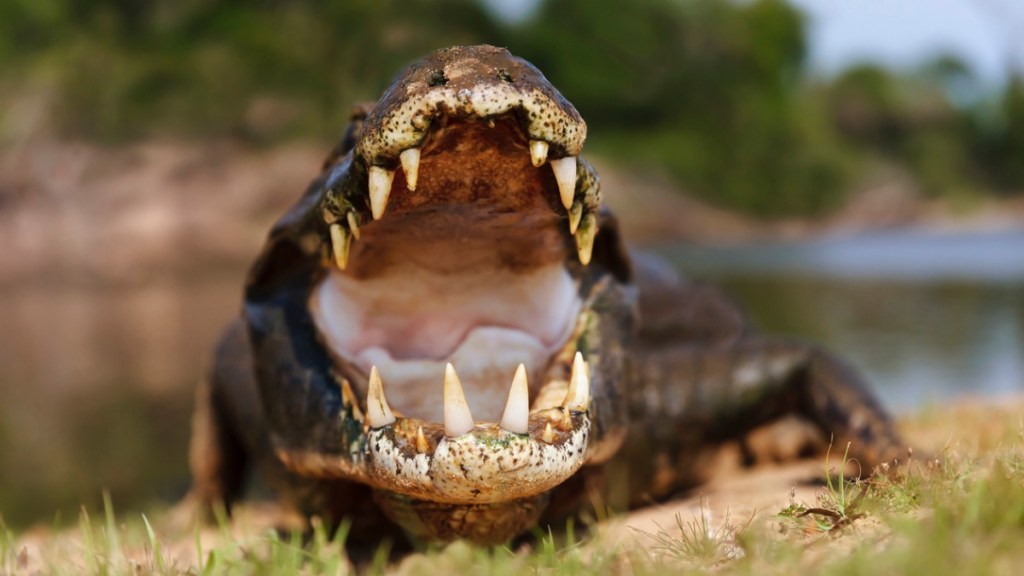 Cannibalism is completely unfathomable to us humans but in the animal world, it’s often a part of everyday life. It is estimated that roughly 7% of all young alligators are eaten by their larger cannibal alligator counterparts. Let’s take a moment to let that sink in, 7% of all juvenile alligators get eaten by other gators…

Here, we see that in action but in a way that has left the Internet stunned. A small-to-medium-sized alligator is stalking a Great Egret (bird) which is sometimes referred to as a great white heron or great white egret.

The gator thought he was going to score a sizable meal. It’s a pretty big bird after all. But at the last second, a straight-up dinosaur cannibal alligator swoops in and devours the other alligator. This all took place in Florida but it’s unclear where in the Sunshine State it happened.

Cannibal Alligator Devours Other Gator Stalking A Great Egret (Bird), Ambushing It Out Of Nowhere

As you can imagine, people are completely floored by that footage. It’s absolutely astonishing. Some of the reactions are incredible and perfectly capture the feeling of amazement people have been left with after watching that cannibal alligator swoop in out of nowhere.

How the bird was feeling:

"Well, look at that…! Okay, see ya, guys." pic.twitter.com/ptPXQjoDmU

A very plausible explanation for why the bigger cannibal alligator ate the other gator:

When the big croc was a hatchling, he got stuck in a net. Instead of eating him, the crane saved him and they became lifelong friends. And big croc always has crane’s back!

The birds were in total disbelief:

Interesting how the bird just watches the whole thing

After all that, I’m mostly astonished that someone captured that entire cannibal alligator saga on camera. It’s nuts.

How Common Are Cannibal Gators In Florida?

This Instagram photo from Bobby Wummer at Circle B Bar Reserve last Fall sort of blew the lid off ‘cannibal alligators’ being a thing. That photograph went viral FAST with most people incredulous that alligators could eat other alligators.

To determine how common cannibal alligators really are in the wild, a group of wildlife researchers actually studied this back in 2011. What they found is somewhere around 7% of young alligators are eaten by older, bigger alligators.

What the researchers found is cannibalism in alligators might be a good thing. The numbers suggest that gators eating gators might actually help keep population numbers under control in areas where there is too much competition for food and mates.

What Are People Saying About Footage Of The Cannibal Alligator Nicknamed ‘Grandpappy’?

As you can imagine, the footage you saw above of Grandpappy eating another gator in Lakeland has elicited a LOT of responses online. One Instagram commenter said “I was wondering what the heck he was dragging 😂😂😂” while another added “It’s just his chew toy.”

The smaller alligator that’s being eaten by Grandpappy was said to be his ‘love rival’ with alligator mating season approaching from May to June. One commenter must’ve had that in mind when they wrote “He ain’t gon risk this lil twerp movin in on his WOMAN 💪🏼.”