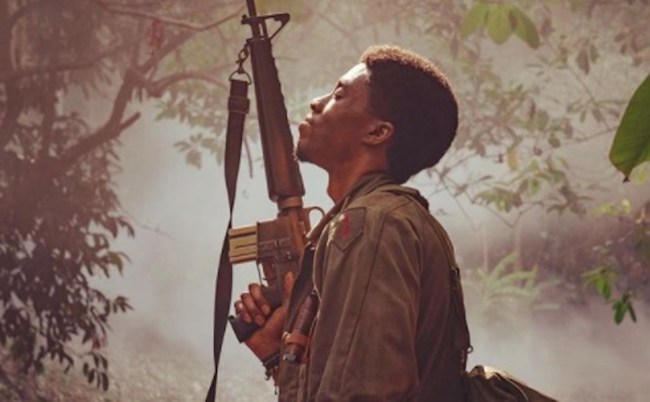 During the nearly century-long history of the Academy Awards, only eight actors have been nominated posthumously and only two have actually won: Peter Finch, for his work in the 1976 classic Network, and Heath Ledger for his performance as Joker in 2008’s The Dark Knight. And based on early reviews of Chadwick Boseman’s final performance in Ma Rainey’s Black Bottom — which hits Netflix on December 18 — it appears the late and beloved actor has a real legitimately shot of joining that historic class of performers.

Now, while I’ve yet to see Ma Rainey’s Black Bottom, all of the early reviews and reactions indicate that Boseman’s powerhouse performance as the trumpeter Levee is award-season-worthy.

“[The] never-nominated Chadwick Boseman as the restless, go-getter trumpeter: he could follow Heath Ledger (“The Dark Knight”) and Peter Finch (“Network”) to win a posthumous Oscar,” says IndieWire.

“The actor, who died in August of this year after a battle with colon cancer that he hadn’t publicly disclosed, has been considered a solid Best Supporting Actor contender for months for his role in Spike Lee’s “Da 5 Bloods.” And with initial press screenings of George C. Wolfe’s Broadway adaptation “Ma Rainey’s Black Bottom” taking place this week, Boseman makes a formidable case for Best Actor attention as well,” says The Wrap.

Chadwick Boseman is electric in Ma Rainey’s Black Bottom. Sizzling from start to finish, and has you hanging on his every word,” said Perri Nemiroff from Collider.

Boseman’s turn in Ma Rainey’s Black Bottom isn’t the only performance getting early Oscars hype, as Netflix is also reportedly campaigning for him to be nominated for Best Supporting Actor for his performance “Stormin’” Norman Earl Holloway, the fallen leader of the group of Vietnam veterans.

Despite being the youngest of the group (director Spike Lee chose not to de-age the rest of the cast), Boseman’s character oozes the spiritual gravitas of a beloved leader of men and is, in my opinion, a shoo-in for the Best Supporting Actor category.

While it’s unfortunately due to his untimely passing, Boseman’s career is being recontextualized now that fans of his work are aware he filmed all of these iconic performances — from Black Panther to Marshall to Ma Rainey’s Black Bottom — whilst battling a deadly disease. It’s only right that he’s also now, finally, given the award season recognition he deserves.