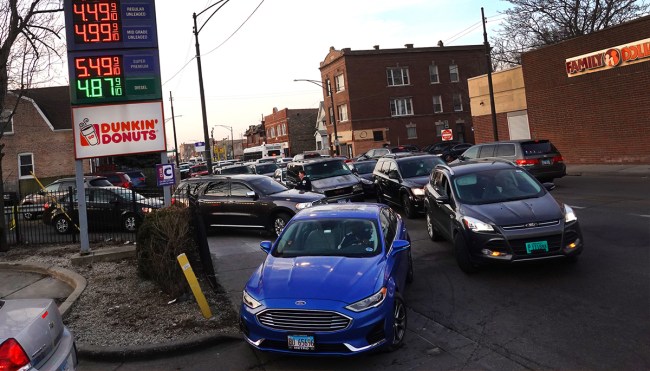 If you use a car as your primary method of transportation—or simply pay the slightest bit of attention to the news—then you’re likely aware people around the United States are dealing with some major Pain at The Pump due to a spike in gas prices that has seen the cost of a typical gallon rise by 25% over the past couple of months.

The increase can mostly be traced back to the global ramifications of Russia’s decision to invade Ukraine, and it seems very unlikely any immediate relief will be in the cards at any point in the near future.

However, Willie Wilson—a businessman who made a fortune as the owner of a medical supply company—did what he could to make life a bit easier for people in Chicago when he announced he’d be giving away $200,000 worth of gas in the city.

On Thursday morning, people flocked to the ten gas stations where they could claim up to $50 worth of fuel only to discover plenty of others had a similar idea, as Wilson’s giveaway generated some absolutely massive lines as car owners waited for hours in the hopes of filling up their tank.

Long lines and traffic jams for 200k worth of free gas at 7am in Chicago courtesy of Willie Wilson. (Photos from Falcon on the Westside in East Garfield Park and Gulf on the Southside in Washington Heights) 📷: @vashon_photo pic.twitter.com/yQTk3ICu1y

Huge queues lined up in Chicago for free gas pic.twitter.com/yA52Vvwct8

Willie Wilson is giving away 200k in gas at 7am ($50 a car at 10 Chicago gas stations). If you are thinking about going,you’re already about 4 hours too late. These are the lines on the south side for stations at 91st & Stony and 95th & Constance. 😳 pic.twitter.com/hyE06ofNVy

FREE GAS! A Chicago millionaire announced he would give away $200,000 in fuel, and it caused traffic to be backed up for blocks on a city street!https://t.co/tMlM86RHFK pic.twitter.com/RduSVGAzjF

Highlight of the day, man running out of gas to get free gas. #chicago #freegas pic.twitter.com/J2O0qQvGWc

According to WGN, it only took three hours for the participating stations to give out all $200K worth of gasoline, but Wilson says he’s gearing up for another giveaway at more locations (including some in the Chicago suburbs) to the tune of $1 million on March 31st.