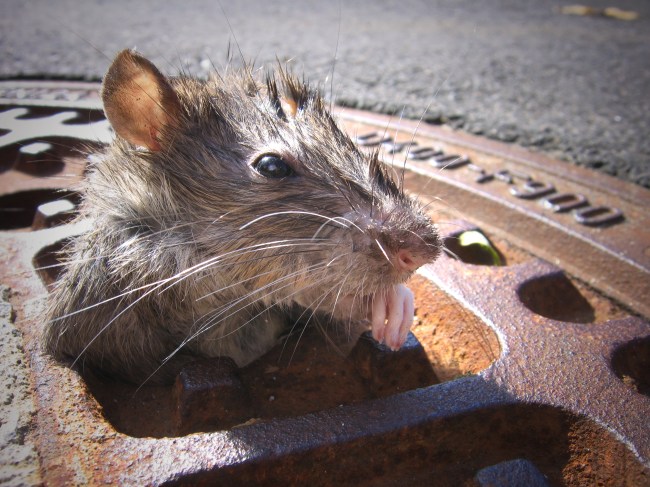 There are A LOT of things I miss about living in NYC. I moved there after college and was there for a long time before moving back to Florida a few years ago. I miss the 24/7/365 access to every type of cuisine on the planet and being able to get delivery or take-out from the best restaurants on the planet when I was hungover on a Sunday. I miss how every great band on the planet performs in NYC because it’s the center of the universe. I miss how you can catch a direct flight to anywhere on the planet. But I don’t miss the rats.

Rats are everywhere in NYC. It’s part of life. You learn to accept it and move on pretty quickly. But you expect them to not come in contact with your food. That’s one of the few inner sanctums you want to know the rats haven’t penetrated. Unfortunately for Chipotle customers in Washington Heights, a report in the New York Post makes it sound like the restaurant is waging an all-out war against the rats and it sounds like the rats are winning.

The report alleges that four employees have been bitten by the rats who have found a taste for the avocados. Some are terrified of entering the basement out of fear of a rat attack. The location on Broadway near 169th closed to customers after rats reportedly chewed through the wires of the computer system they use to take orders but employees are still coming to work to fight the rats.

They say they’ve killed dozens of the rodents by stomping on them, smacking them with broom handles, dropping boxes on them and various other medieval methods of extermination.

“It really started to take a toll on us,” said Melvin Paulino, a three-year veteran at the store who was bitten by a rat last Friday while cleaning. “We’re all scared, it’s pretty common that some of my co-workers will just start screaming out of the blue and we don’t know what’s happening.

“It’s pure chaos every time a rat appears.” (via NYPost)

The report alleges this all began last Summer when employees first noticed avocados with ‘small nibbles’ taken out of them. Then it was holes in the bags of rice.

Soon they found rat droppings in the boxes of food. And they said it seemed as if the rats were multiplying in a hurry.

Meanwhile, the rats became increasingly brazen and seemed to be multiplying.
Employees were forced to move avocados into the cooler, and some workers even refused to set foot in the basement for fear of a rat attack.
The first employee was bitten in October, but the store remained open for at least a month until another rat chomped the hand of the store’s general manager on Nov. 23, workers said.
After a closure of a few days for cleaning, the store reopened, but workers were still afraid of the rats, which had apparently grown fat off of the constant supply of food.
“The whole situation seemed crazy to us, we definitely felt it was incorrect to keep the store open while all of this was happening,” Paulino Ruiz said. (via NYPost)

A representative for Chipotle told the Post the ‘health and safety’ of their employees is a ‘top priority’ and this location has been closed since November 23rd and in that time they’ve arranged ’emergency pest service and deep cleaning.’ They also say they are working with the landlord on improvements before reopening.

Sure. I totally believe the company with over 2,600 locations is bending over backward for employees at a restaurant that’s been overrun by rats. Chipotle has such a rich history of putting people before business. Those reports about ‘Forever Chemicals’ in the food, don’t pay attention to those. Nevermind that employee who won millions from the company after they were framed for stealing $626. Forget all about the history of customers getting sick. They really care this time…

My second apartment was a 7-bedroom townhouse in the Upper East Side on 80th and Lexington where I lived with five friends. We had a backyard/garden that actually shared a fence with Madonna. The late James Lipton of Inside the Actors Studio lived two doors down. The place was NICE, definitely not intended for six guys who’d recently graduated college.

On the ‘garden floor’ that was street level we’d get rats sprinting across the floor on the regular. I wouldn’t even walk into the room facing the backyard if I didn’t have to because there was a decent chance a rat was in there escaping the cold. This was a multi-multi-million dollar townhouse and we were just living side by side with rats. Once, a rat ran across my roommate’s pillow WHILE HE WAS IN BED. I don’t miss that at all.