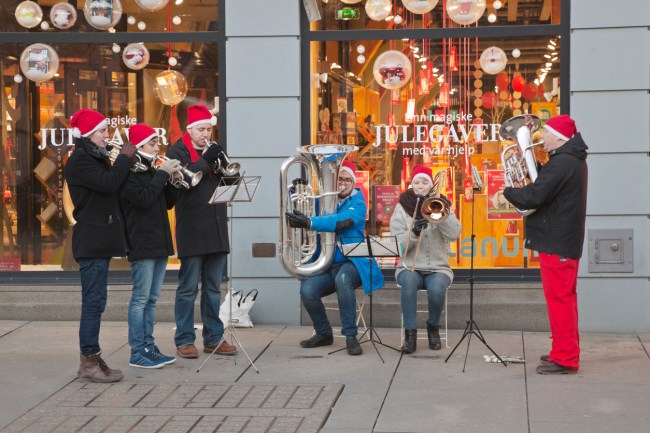 It starts to go down around this time every year. No sooner than the spirits of Halloween present are being dragged to hell by their ghostly balls, we look up, only to see that the hearse carting this popular Pagan holiday to its grave for another twelve months is being chauffeured by some scrawny dude in a terrorist beard and a Santa hat. And when that bastard blasts by at top speed, shaking his fist out the window and screaming, “Jesus is at the wheel now, pendejos,” not only do we notice that his wrists are bleeding profusely from self-inflicted stigmata but we hear the sounds of holiday merriment blasting at top volume. It is as though he is trying to remind us that, like it or not, tis’ the season for going broke, freezing our asses off to and from work and spending more time with our families than we’d like to. That’s right – break out the hard liquor. It’s Christmas time, motherhumpers, and from now until the end of the year everything we do will be shrouded by some miserable, gut-wrenching rendition of the Hallmark holiday soundtrack.

Try as one might, there is no escaping the holiday tuneage that is destined to deliver us all a sonic prostate exam over the next several weeks. It is something that can suck every last morsel of hope out of the strongest individual. So much in fact that this is often the time of year when people start leaping off tall buildings and engaging in other suicide tactics just to escape the darkness and despair that this religious nod to commercialism brings about by the time it is all said and done.

Although the bulk of gloom that stems from the holidays is often attributed to daylight savings time, seasonal affective disorder and a bunch of other scientific gobbledygook, psychologist Linda Blair says this madness can manifest in those exposed to too much Christmas music. This is especially true, she says, for those unfortunate souls employed in a department store during the holiday season.

At the beginning, holiday music might only serve as an annoyance to those who believe this Jingle Bell genre shouldn’t be allowed to make an appearance until after Thanksgiving or even later. But other than strong feelings of contempt, no harm is done. The music may actually strike up a sense of nostalgia in even the most cynical Scrooges and put them in the holiday spirit. This is attributed to something called the “mere exposure” effect. Essentially, humans tend to appreciate things that are familiar to them – Christmas music is no exception. It is one of the reasons retail outlets run their holiday playlist non-stop during the holiday months. Research has shown that when shoppers are surrounded by the sights, sounds and smells of the Christmas, they spend more money.

[Editor’s Note: Let’s take a break to listen to what is still the most electric Christmas song of all time.]

But the exposure effect works differently on those people who work in the retail space. For eight to ten hours a day, nearly every single day, they are exposed to the same godforsaken Christmas songs over and over again until it eventually eats away at their psyche and drives them to the brink of insanity.

“People working in the shops [have to tune out] Christmas music, because if they don’t, it really does stop you from being able to focus on anything else,” Blair told Sky News. “You’re simply spending all of your energy trying not to hear what you’re hearing.”

This kind of music torture is very real. The concept has been a part of the Central Intelligence Agency’s “enhanced interrogation program” for the past two decades. The government’s psychological experts have determined that exposing a prisoner to the same song for hours on end is a reliable method for ripping away at their mind and getting them to confess to despicable plots.

“If you play it for 24 hours, your brain and body functions start to slide, your train of thought slows down and your will is broken,” Sergeant Mark Hadsell, who works as part of the U.S. Psychological Operations team, told MIC. “That’s when we come in and talk to them.” And if it doesn’t work initially, the CIA has been known to torture prisoners with deafening levels of repetitive music for months.

So, when you head out this year to do your Christmas shopping, please understand that the warm smiles smeared across the faces of sales clerks when they ask, “How may I help you?” are likely fronts for homicidal rage. Let’s hope you are not the customer they are assisting when “Rudolph the Red-Nosed Reindeer” starts blaring across store for the 6,000th time, sending them on a murderous rampage. Our advice is to be extremely polite and respectful to these people (you should be anyway) and do as much shopping online as possible. Otherwise, you could find yourself impaled and dangling from one of those giant candy canes they put in food courts.