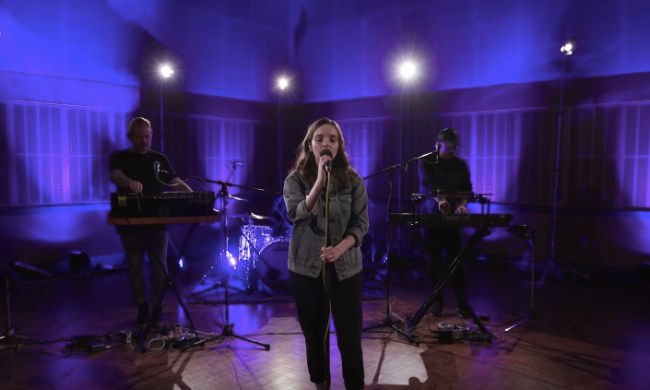 I don’t have anything against CHVRCHES. The Synth-Pop group from Glasgow has fans all over the world. They seem to do really well on the festival circuit from Coachella to Lollapalooza and Bonnaroo to Glastonbury. Their music is certainly catchy and easy to listen to if Synth-Pop is your thing, but it’s not really my cup of tea.

This CHVRCHES cover of Kendrick Lamar‘s ‘LOVE’ was recently filmed on Triple J’s Like A Version, an Australian radio segment where every Friday the DJ gets a notable band or musician to come into the studio and cover a song that they love. So CHVRCHES chose this track to play, Triple J didn’t choose it for them.

When I saw ‘CHVRCHES Cover Of Kendrick Lamar’s ‘LOVE” trending on YouTube I fully expected to hate this cover. I don’t need to tell you all how great Kendrick is. K-Dot is at the top of his game right now, at the top of the Rap/Hip-Hop world. He’s earned nearly $80 million in the past few years from a grueling tour schedule and by dropping banger after banger, hit after hit.

After watching this video I started scrolling through the Like A Version/Triple J YouTube channel to find some other covers worth watching and I landed on this one, Joey Bada$$ covering Prince’s ‘When Thugs Cry’