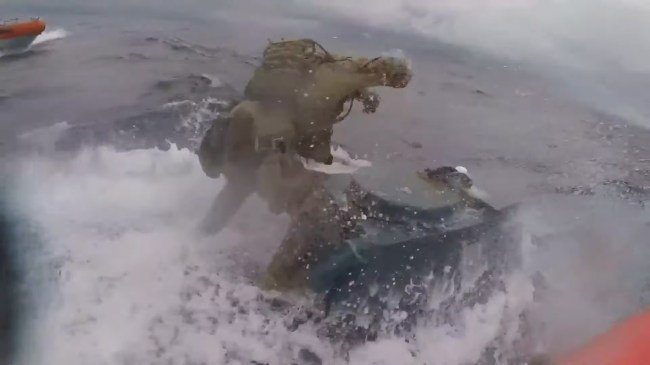 If you ever need more proof of what badasses the bros in our military are, just whip out this video of a U.S. Coast Guardsman giving absolutely zero f**ks in the middle of chasing a drug-smuggling submarine.

The video shows crew members from the Coast Guard Cutter Munro as they chase a “self-propelled semi-submersible suspected drug smuggling vessel (SPSS)” – aka a drug-smuggling submarine – through international waters in the Eastern Pacific Ocean.

The description of the video completely undersells just how dramatic it is, saying simply that crew members “boarded” the vessel.

Yeah, “boarded.” They had to pull up to this sub in their boat, jump onto the submarine while both their boat and the sub were moving, in the middle of the ocean, and then stand there and hang on to the top of the sub, bang on the hatch until one of the smugglers opened it up, and make the bust. All in a days work, right?

According to a press release on the U.S. Coast Guard’s official website…

The crew of the Coast Guard Cutter Munro will offload more than 39,000 pounds of cocaine and 933 pounds of marijuana worth a combined estimated $569 million, which was seized in international waters in the Eastern Pacific Ocean.

The drugs represent 14 separate suspected drug smuggling vessel interdictions and disruptions off the coasts of Mexico, Central and South America by three Coast Guard cutters between May and July 2019.

The Coast Guard increased U.S. and allied presence in the Eastern Pacific Ocean and Caribbean Basin, which are known drug transit zones off of Central and South America, as part of its Western Hemisphere Strategy. During at-sea interdictions, a suspect vessel is initially detected and monitored by allied, military or law enforcement personnel coordinated by Joint Interagency Task Force-South based in Key West, Florida. The law enforcement phase of counter-smuggling operations in the Eastern Pacific is conducted under the authority of the 11th Coast Guard District, headquartered in Alameda, California. The interdictions, including the actual boarding, are led and conducted by members of the U.S. Coast Guard.

Watch Vice President Pence deliver his remarks to the U.S. Coast Guard below…