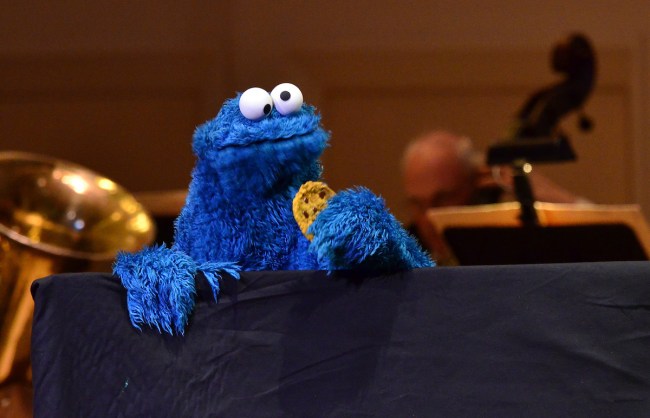 Cookie Monster likes to sing that “C is for cookie” but a geological find might change the lyrics to “C is for cash” after a piece of volcanic rock was split open and the insides look exactly like the beloved Sesame Street character.

When I first saw the headline to this story, I thought the rock would slightly resemble Cookie Monster, like when old ladies find a potato chip that kinda looks like Jesus or Marv Albert, but there’s no denying this hunk of quartz looks exactly like the cookie-devouring muppet.

“It is rare to find one so well defined like this,” said geologist Mike Bowers, the owner of the rare gem.

Bowers told The Sun that he has seen other similar rocks but “this is probably the most perfect Cookie Monster out there.”

Bowers told The Sun that the agate — a type of quartz found in ancient lava cavities — was found in the Rio Grande do Sul region of Brazil on a trip back in November.

The volcanic rock is made up of blue quartz crystals, giving Cookie his signature blue color. The holes inside the rock look exactly like eyes and a smiling face.

My kind of news day:

After posting footage of the discovery to his Facebook page, Bowers has received several offers for the rare stone, some sums in the neighborhood of $10,000.

Bowers wouldn’t disclose who exactly is willing to fork over $10K for a rock that looks like a Sesame Street character but I could only wish to have that type of FU money.