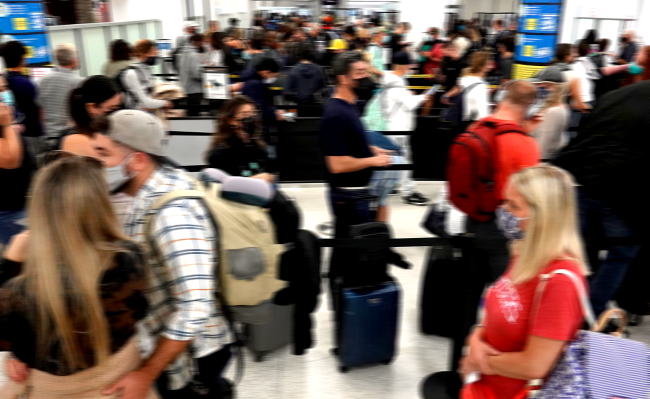 Two men were arrested Monday at Miami International Airport after a large brawl was triggered at one of the gates.

According to NBC Miami, the melee began at Gate H8 when one of the men, 30-year-old Mayfrer Gregorio Serranopaca of Kissimmee, Florida, refused to let an airport employee in a cart pass, entered the vehicle, broke the key, then refused to get out of the cart.

The employee then notified police, who arrived on the scene and attempted to calm Serranopaca down. This resulted in a physical confrontation.

Videos of the scene posted on social media show a large crowd surrounding a police officer who appears to have a man in a chokehold. When others try to intervene the unruly traveler breaks free and chases after the cop, hitting him several times.

It was at that point the police officer appears to draw his gun on Serranopaca. 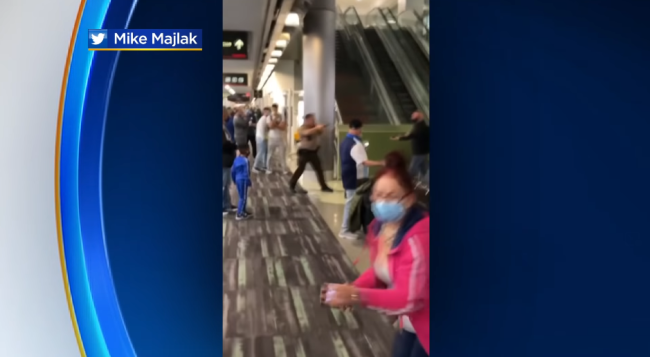 The man who was arrested, Alberto YanezSuarez, 32, of Odessa, Texas, was allegedly “grabbing and pulling officers” as they attempted to arrest Serranopaca.

Miami International Airport issued a statement about the brawl

“Unfortunately, that passenger growth has come with a record-high increase nationwide in bad behavior as well, such as the incident this evening at MIA.”

Police reported that Miami-Dade Fire Rescue treated a police officer at the scene who had been bitten on the head by Serranopaca.

He was charged with aggravated battery on a police officer, burglary of an occupied conveyance, criminal mischief and false imprisonment.

Yanez Suarez was arrested on charges of aggravated battery on a police officer and resisting an officer without violence.

Reactions to the shocking footage on social media were a mix of astonishment and disgust.

I miss the good ol’ days when you obeyed and respected the simple requests of a police officer. What gives people the right today to challenge authority or the laws in this country we all agreed to as US citizens?

This airport is understaffed with police, this is the second video showing no cops at the scene.

And everyone filming away.

If they take on the authorities, what is to stop them from turning on a innocent traveler. Cop was in the right.

Everyone wanna record rather than defuse the situation 🙄

Down here in Miami, we refer to this as Monday

The Miami-Dade Police Department is currently investigating what led to the brawl as well as what the circumstances were that led to the police officer drawing his gun.