Coronavirus Update: Iran Commander Says US Created COVID-19 As Biological Weapon, Virus Lives Up To 3 Days, Companies Out At SXSW 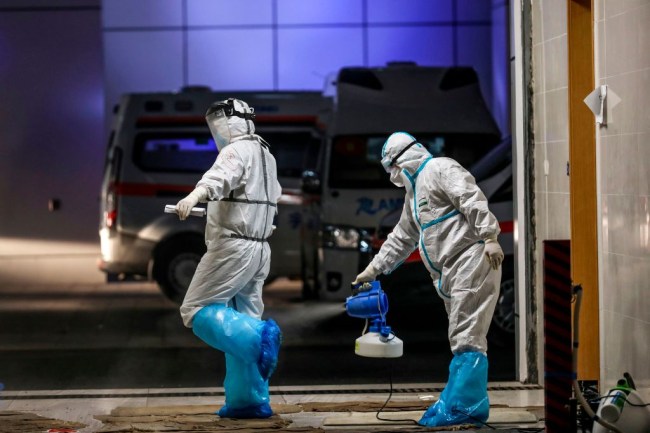 The latest coronavirus numbers show that there are nearly 97,000 confirmed cases and 3,308 deaths. The coronavirus has spread to 81 countries, including the first cases in Egypt, South Africa, and Switzerland.

The German health minister said the coronavirus outbreak was now a “global pandemic,” which is “an epidemic of disease that has spread across a large region; for instance multiple continents, or worldwide.”

“The coronavirus outbreak in China has become a global pandemic,” said German Health Minister Jens Spahn. “The situation is changing very quickly. What’s clear is that we have not yet reached the peak of the outbreak.”

The World Health Organization (WHO) has not declared the COVID-19 outbreak to be a global pandemic yet.

More than 290 million students worldwide will not be at school because of the coronavirus, according to the International Monetary Fund (IMF). There have been 13 countries which have closed all schools and nine more who have implemented local shutdowns.

California Governor Gavin Newsom declared a state of emergency in response to the COVID-19 outbreak. “As part of the state’s response to address the global COVID-19 outbreak, Governor Gavin Newsom today declared a State of Emergency to make additional resources available, formalize emergency actions already underway across multiple state agencies and departments, and help the state prepare for broader spread of COVID-19,” the statement read. “The proclamation comes as the number of positive California cases rises and following one official COVID-19 death.”

A California health official warned people to not touch their faces. During the same press conference, she licked her finger.

California health official tells citizens to "start working on not touching your face," as she proceeds to lick her finger pic.twitter.com/Ip5q8vUSob

Politicians, such as President Donald Trump and U.S. Representative Alexandria Ocasio-Cortez, are having a difficult time following their own advice of not touching faces to spread the coronavirus.

.@RepAOC @AOC speaks to media on #coronavirus: "One of the key parts to preventing transmission is washing you hands and not touching your face…A mask will not protect you if you don't wash your hands and if you continue to touch your face." pic.twitter.com/WNmC3pLAUP

‘I haven’t touched my face in weeks’ — Trump

RELATED: World Health Organization Sounds Alarm That Coronavirus Could Be Feared ‘Disease X’ Scientists Have Been Warning About

The International Air Transport Association (IATA) said the coronavirus outbreak could cost airlines up to $113 billion in 2020 global revenue. In February, the global airline trade association estimated that airline companies would have revenue losses of $29.3 billion.

“The turn of events as a result of COVID-19 is almost without precedent,” said Alexandre de Juniac, IATA’s director general and CEO. “In little over two months, the industry’s prospects in much of the world have taken a dramatic turn for the worse.”

Netflix, Apple, Amazon Studios, Facebook, Twitter, TikTok, Mashable, and Intel have dropped out of the South by Southwest festival and have canceled all SXSW screenings and events in fear of the coronavirus.

Tech companies, including Microsoft, Amazon, Twitter, Redfin, and Textio, have instructed some of their employees to work from home, especially in the hard-hit city of Seattle. Facebook closed its Seattle office after a contractor tested positive for the disease.

Starbucks is no longer allowing you to use personal mugs, but you will still get your discount. “We are pausing the use of personal cups and ‘for here’ ware in our stores,” said Executive Vice President Rossann Williams. “We will continue to honor the 10-cent discount for anyone who brings in a personal cup or asks for ‘for here’ ware.”

Iran has the third-most cases of COVID-19, with 3,513 people infected and 107 deaths. Iran will begin establishing up checkpoints to limit travel between major cities. Iranian health minister Saeed Namaki urged people to reduce the usage of money and to allow gas station attendants to fill their vehicles.

Horrific thread of BBC obtained Videos from #Iran shows bagged bodies in Qom from moment of death till burial.

If these are confirmed to be from Corona as videos claim, death toll is higher than Gov. claims (77): pic.twitter.com/vxmTren3Lt

The leader of Iran’s Islamic Revolutionary Guard Corps (IRGC) launched a coronavirus conspiracy theory that the U.S. created COVID-19 as a biological weapon. On Thursday, IRGC commander Hossein Salami claimed that the United States developed the coronavirus as a biological weapon and then unleashed it in an attack against China. There are currently 162 cases of COVID-19 in the United States.

Dubai has requested that all sports-related activities be postponed until the end of the month.

Whitty emphasized that it is still safe to use public transportation, but you have to change your behavior.

“Just touching it will not give you the virus. It’s if you touch it and then touch your face having not washed your hands between them,” Whitty said. “If you go on the tube and touch a rail, that’s fine, but just be aware of what you do with your hands. Don’t touch your face, wash your hands, and then you can do what you like.”