Couple Find 66 Bottles Of Prohibition-Era Whiskey Hidden In Walls Of Their Home – Some Worth $1,000 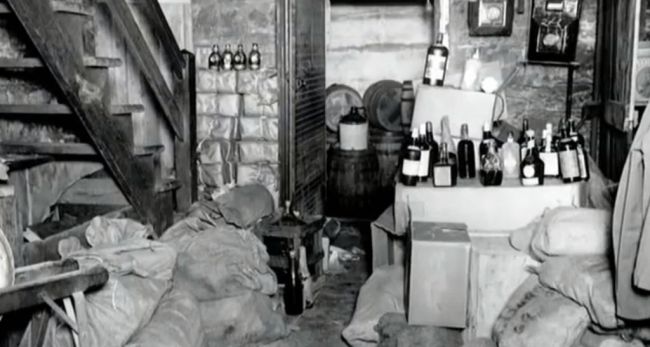 Nick Drummond and Patrick Bakker were doing renovations on their house that was built over a century ago. The home that was originally built in 1915 was once owned by Count Adolph Humpfner, a man who was rumored to be involved in bootlegging during Prohibition. He suddenly died in 1932, under suspicious circumstances, according to Drummond.

“The only witness to his death was the administrator of his will. This administrator was none other than Harry Barry, the recent mayor of nearby Fort Plain,” Drummond wrote on Instagram. “Harry Barry acted as a sort of investigator after his death, trying to sort out the mystery. He traveled to Germany twice and interviewed hundreds of people. Humpfner’s elderly widowed sisters claimed Harry Barry misrepresented the fortune and took advantage of them. His estate was worth over $140,000 in 1932.”

“He had many aliases and was known as the mystery man of the Mohawk Valley, and ‘the count;’ although there was never proof of his royalty beyond his own claims,” Drummond continued. “He ran away from his family in Bavaria, and his wife had been missing since 1912. She was eventually declared legally dead in 1935, but then discovered alive at a beach in Brooklyn in 1936.”

“It was a mystery to locals at the time how he amassed his fortune. He owned a local bank, the school gymnasium, and 23 properties in NYC and NJ,” Drummond said. “After his death, multiple secret compartments were found in his truck and businesses but they could never prove anything! There were also papers strewn around his home with deeds to various properties, foreign bank accounts, and aliases. There was a huge drama over who got his fortune after his death.”

While the couple were removing some rotting wood panels around the home in October, they found what may explain the source of Humpfner’s unknown wealth.

“I was in the process of removing this rotted wood skirting that went around the mudroom sort of where the foundation would be if it was a truly finished structure, and as I’m peeling back the boards on one of the sides, all of the sudden all this hay falls out and I was very confused,” Drummond said, according to The Denver Channel. “And at first I was like ‘oh this must be insulation’ – of course all this is taking place within a few seconds in my head – and then I look and I’m like ‘well wait a second, what’s that glass thing?'”

They discovered 66 bottles of Scottish whiskey labeled “Old Smuggler Gaelic” in their Upstate New York home. The couple plan on keeping a couple of the damaged bottles, but will sell the rest of them to collectors. The value of the bottles is estimated to be worth as much as $1,000. BRB, I gotta go tear down the walls in my house.

The couple said they haven’t sampled the century-old alcohol, but say they will soon.

“Every building has a story to tell,” Drummond said, noting that they plan to preserve the home’s incredible history. “And it’s really a matter of peeling back all the different parts and pieces and sort of analyzing them. And you’d be surprised by what you can find.”

“It was like you found the jackpot,” Bakker said. “Like this is what you always want to find in a house.”