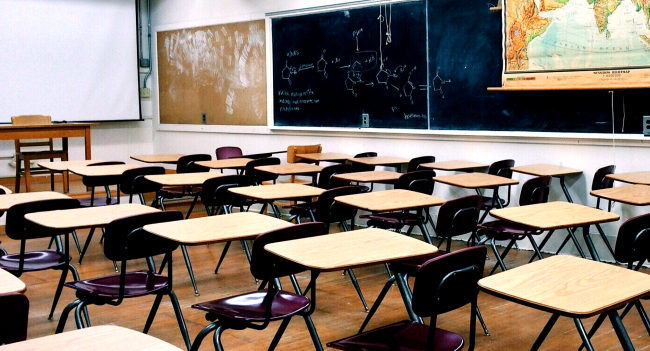 Unlike Pharrell’s $17 million glass mansion that many believe looks like a community college, this kickass home actually was at one time a school.

What was once Perry Elementary School in Mount Morris, Pennsylvania is now the home to Rick and Crystal Smith.

The Smiths purchased the school and surrounding property back in 2015 for less than $350,000.

“I walked outside and there was a rainbow over the top of the school, and he looked at me and said, ‘I’m going to buy that school.’ I looked up and said, ‘I can’t argue with that rainbow,'” Crystal told Realtor.com.

Since the purchase the couple has made numerous renovations and additions and are selling the very unique residence at 145 School Road for $2.375 million.

A Pennsylvania couple purchased an abandoned elementary school 5 years ago and converted it into a home with four bedrooms and five bathrooms, PLUS features an indoor basketball court and space for 30 cars. The home is now on the market for $2.4 million.

“It’s a once-in-a-lifetime project, and it’s cool to live in a school,” said Crystal, adding, “Everybody thought we were nuts.”

Who would have ever thought that turning a elementary school into a home could turn out so cool?

The “school” house covers a whopping 14,716 square feet, has four bedrooms, and more than four bathrooms.

They also left a few of the original features in tact like a boys and girls room with stalls, one classroom, and nurse’s office.

They also have their kitchen located in, you guessed it, the school’s cafeteria.

“It’s still the same length and width as it was when it was the cafeteria,” Herrington said.

Somebody turned the old elementary school in Mount Morris, PA into a mansion and they’re asking $2.4 million to sell it. https://t.co/kvcDVDmUzK

There is also a refurbished basketball court complete with the windows where the lunch staff served the students along the wall.

Oh yeah, new owner Rick Smith? Yeah, he to was once a student at Perry Elementary. Talk about bringing back memories of your youth.

Back to School? A Dazzling Elementary School Conversion in Pennsylvania: What was once Perry Elementary School is for sale as a private home. Listed for $2.38 million, the converted school measures a whopping 14,716… https://t.co/ka5lybqRCL #SarahSellsHomes #dreamtown #Edgebrook pic.twitter.com/7TB1Zj7iOC