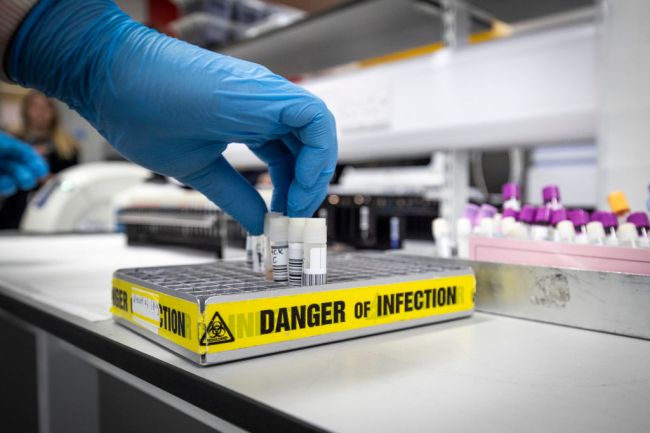 The COVID-19 virus can survive on surfaces for much longer than researchers originally thought, according to a new study in Australia.

Australia’s science agency CSIRO conducted experiments on the COVID-19 virus and researchers concluded that the virus can remain infectious on surfaces like money, phone screens, glass, and even stainless steel for up to 28 days.

By comparison, Influenza A – the common flu virus – has been found to survive on surfaces for 17 days.

Researchers tested the virus at 68 degrees – the typical room temperature — and also in the dark to remove the effect of ultraviolet light since studies have shown that sunlight can kill the virus.

In the study, the virus was dried in an artificial mucus on a variety of surfaces at concentrations similar to samples from coronavirus patients and then recovering the bug over a month.

Experiments done at 68, 86 and 104 degrees Fahrenheit showed the virus survived longer at cooler temperatures, longer on smooth surfaces and longer on paper bank notes than on plastic ones.

The study also found that the virus stopped being infectious within 24 hours at 104 degrees on some surfaces.

“It really reinforces the importance of washing hands and sanitizing where possible and certainly wiping down surfaces that may be in contact with the virus,” said Shane Riddell, the lead researcher in the study.

Professor Ron Eccles, a former director of the Common Cold Centre at Cardiff University, criticized the study and said it causes “unnecessary fear in the public.”

Eccles told the BBC, “Viruses are spread on surfaces from mucus in coughs and sneezes and dirty fingers and this study did not use fresh human mucus as a vehicle to spread the virus. Fresh mucus is a hostile environment for viruses as it contains lots of white cells that produce enzymes to destroy viruses and can also contain antibodies and other chemicals to neutralize viruses. In my opinion, infectious viruses will only persist for hours in mucus on surfaces rather than days.”

Prior to the Australian study, previous lab tests concluded that the virus typically survives for 2-3 days on money and glass and up to six days on plastic and stainless steel.