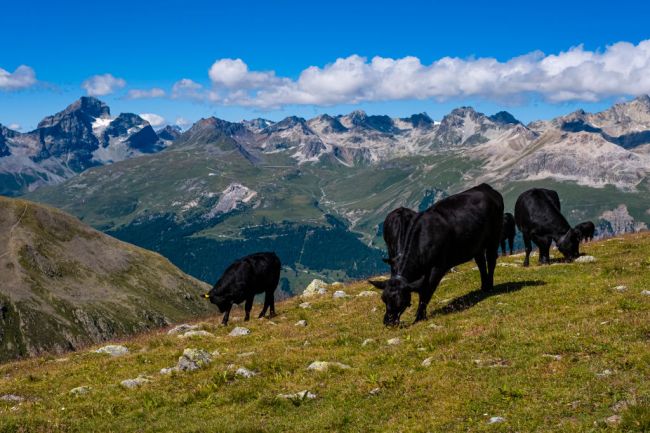 Each year, as summer comes to a close, a few thousand cows travel from higher ground in the Swiss Alps to the valley below. However, some of those cows are unable to make the trip.

As a result, the pregnant and injured bovine get a jump on their healthier herdmates and are airlifted down the mountain. A dozen of cows got the lift this year and it makes for an incredible visual.

Cows injured during their summer sojourn in the high Swiss Alpine meadows get an airlift pic.twitter.com/xO5qaPVtlq

Only about 1% of the group is unable to make the trek on foot but their trip is extremely entertaining and makes for some amazing images.

Some cows got helicopter rides down the mountain after getting injured in the Swiss Alps and the pictures (by Reuters/Arnd Wiegmann) are everything pic.twitter.com/mX668yn1cX

As seen in the video, the cows are transported one at a time in a sturdy mesh harness at the end of a cable below a chopper. Waiting farmers are there to receive the cows and use guide ropes to land them safely before moving them into more conventional trailers.

It is a rather calm transport and the cows that are airlifted are typically unfazed by their aerial trip.

“I didn’t ask a cow how it feels after such a flight as it couldn’t answer, but it’s only a short distance and it has to keep going. It was only a short calm flight,” dairy farmer Jonas Arnold said, per WABC.

WATCH: Cows descend from the Swiss Alps after spending seven weeks in the mountains, marking the end of the herds' summer sojourn pic.twitter.com/Y1RtEqtjQ0

These same cows will be back on the moooooooove (get it?) when the warmer weather returns in spring.