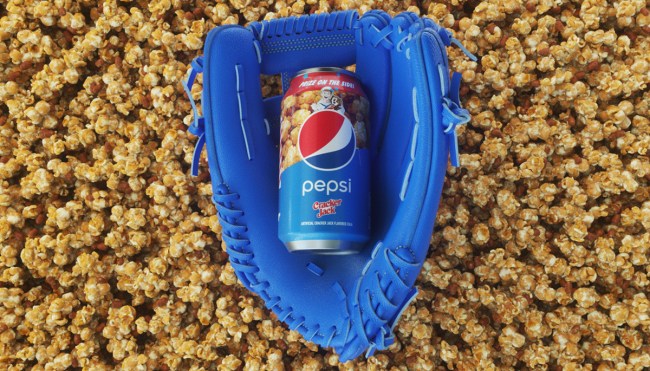 That particular source of joy sits firmly at the top of my MLB Concession Stands power rankings, but when it comes to the one item that’s inextricably linked with America’s Pastime more than any other, you have to give credit where credit is due to a classic that has stood the test of time: Cracker Jack.

The caramel-coated popcorn and peanuts were originally introduced in 1896, and six years later, the snack earned a mention in a little song known as “Take Me Out to the Ballgame.” That particular development turned out to be a marketing team’s dream, as you have to imagine companies would kill for the free plug Cracker Jack gets whenever the seventh-inning stretch rolls around.

Now, the classic stadium treat has inspired a new creation that’s rolling out just in time for the start of playoff baseball. On Thursday, Pepsi announced it teamed up with Cracker Jack to develop what is being described as the “first-ever Cracker Jack flavored cola,” which was produced in a limited run of just 2,000 cans.

In order to get your hands on a can, you’ll have to post a video of yourself singing “Take Me Out to the Ballgame” on social media and check off all the requisite boxes to make sure you’re eligible. If you’re one of the lucky winners, you’ll not only get your hands on a can (complete with the temporary tattoo attached to the side) but get a few Cracker Jack bags to pair with the soda.