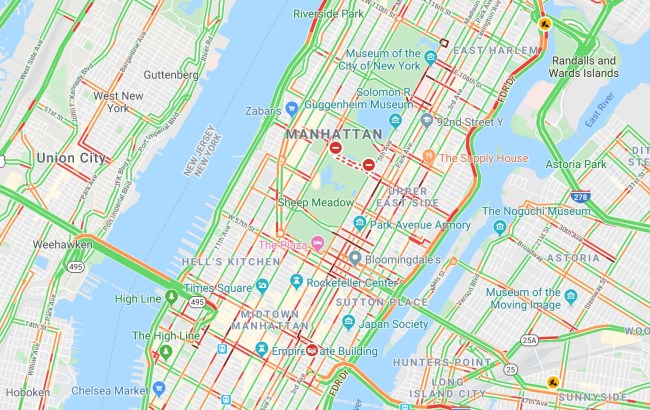 I rely on Google Maps way more than I’d like to. Every morning and afternoon when I hop in the car I pop open my phone to check Google Maps for the quickest route from/to home.

Don’t get me wrong, life with Google Maps is a hell of a lot better than back when I first got my driver’s license and parents handed me a thick Atlas of America’s roads and were basically like ‘figure it out for yourself, that’s what people do’. I once road-tripped from Aspen back to Florida, missed my exit in southern Colorado, and drove several hours in the wrong direction into New Mexico while trying to get to Texas for the night. That’s the type of shit that could easily happen back before Google Maps.

So, yes, I love that I can pop open my phone and quickly find the fastest route to anywhere in the world. See a list of subway times. And find out how long it’ll take me to walk across town. But I hate this lingering feeling that I can be manipulated by Google’s technology at any time and they can send me past a particular gas station if they wanted to. Or, for instance, some dude could create a fake traffic jam using a wagon.

This guy loaded up his wagon with 99 smartphones running Google Maps and immediately created one of those DARK RED traffic jams on Google Maps in a prank that I can only assume will soon be used in heist movies. Truly, if this doesn’t show up in National Treasure 3 I’m going to be bummed out. Just watch this insanity (the clip is quick):

Real talk: who the hell has 99 smartphones at their disposal? This seems like a wildly expensive prank. A couple hundred bucks for each phone, the SIM cards, phone activations. This seems like a prank where the price tag got out of control in a hurry.

I’m sure that plenty of people at Google have seen this footage by now and there are internal discussions taking place about how they could combat this but it just seems like such an easy exploit that they should’ve always had safeguards in place against this. What if I’m selling pulled pork on the side of the highway and I want to send every driver in the area past my store? It doesn’t seem all that difficult to create a few quick traffic jams to re-route traffic using this method.

It’s creeping me out.